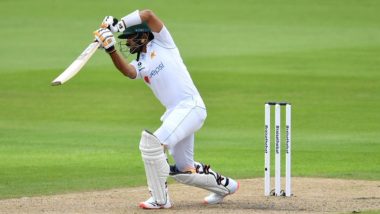 Rain and bad light played spoilsport on day one of the first Test between England and Pakistan at the Old Trafford Cricket Ground in Manchester. Pakistan opt to bat first were 139 for two when play was called off. Babar Azam and opener Shan Masood finished unbeaten on 69 and 46 respectively. For England, Jofra Archer and Chris Woakes picked a wicket each. Only 49 overs were possible after heavens opened up in the post-lunch session. Pakistan vs England Highlights 1st Test 2020 Day 1.

Opening pair of Masood and Abid Ali did well to see off the hostile spell from James Anderson and Stuart Broad. The duo made sure England were wicketless till the 16th over when Archer went through Abid’s defence. Three overs later, the home side then found another success when Woakes trapped Pakistan, captain Azhar Ali, in front of the wickets for a six-ball duck. Azhar reviewed the decision but was all in vain. Azhar Ali Trolled by Netizens After Being Dismissed for a Duck in England vs Pakistan 1st Test 2020 (Watch Video).

Babar then joined Masood, and the duo denied England further wicket. At the close of play, these two had added unbeaten 96 for the third wicket. Meanwhile, let’s have a look at some stats from day one’s play.

# Azhar Ali was out for a duck for the 15th time in his Test career.

# Pakistan openers have not put a 50-run partnership against England in England since 1996. Last opening pair to do it was Saeed Anwar and Aamir Sohail.

# Babar Azam is the only batsman with an average of over 100 in ICC World Test Championship.

England fielded an unchanged side that played last against West Indies, meaning Ben Stokes will continue to play as a proper batsman. Pakistan, on the other hand, added included two leg-spinners- Shadab Khan and Yasir Shah- in their playing XI.

(The above story first appeared on LatestLY on Aug 05, 2020 11:40 PM IST. For more news and updates on politics, world, sports, entertainment and lifestyle, log on to our website latestly.com).