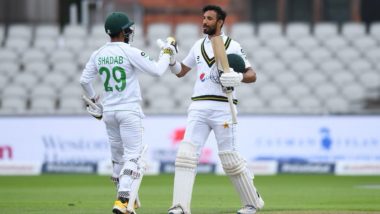 Pakistan have the upper hand in the first Test against England at the Old Trafford Cricket Ground in Manchester. The visitors posted 326 in their first innings after Shan Masood scored impressive 156 and then had hosts on the back foot by picking four quick wickets. In response to Pakistan’s total, England at the close of play on day two were 92 for four with Ollie Pope and Jos Buttler batting on 46 and 15 respectively. The home side trails by 234 runs. Pakistan vs England Highlights of 1st Test Day 2.

Shaheen Afridi trapped opener Rory Burns in front of the wickets in the very first over to help Pakistan get off to a perfect start with the ball. Few overs later, Mohammad Abbas accounted for Dominic Sibley and Ben Stokes to put visitors in total control. The latter was dismissed for a seven-ball duck.

Joe Root and Pope then tried to stabilise the England innings but Yasir Shah separated the two after a 50-run partnership by removing the English captain. Pope and Buttler then added 30 runs for the fifth wicket before play was called off. Meanwhile, here is a look at some stats from day two. Shan Masood Becomes First Pakistan Opener to Score a Test Century in England Since Saeed Anwar in 1996, Registers his Fourth in Tests.

# Shan Masood is also only the second Pakistan opener ever to register three successive Test tons.

Earlier, Pakistan resumed on an overnight score of 139 for two with Masood and Babar Azam as two overnight batsmen. Babar fell without adding a run to his overnight score, but Masood kept going to register a ton. He added valuable 105-run stand with Shadab Khan to take Pakistan close to 300.

(The above story first appeared on LatestLY on Aug 07, 2020 12:18 AM IST. For more news and updates on politics, world, sports, entertainment and lifestyle, log on to our website latestly.com).