Having a purse of INR 53.2 crore, Punjab Kings bought 12 players in the bidding event who’ll have the onus to take Punjab to glory. As mentioned above, Punjab had an average campaign last season. Although they performed well as a unit, their tendency to collapse in crunch situations cost them many games. 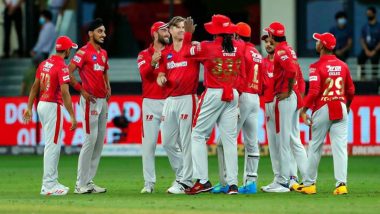 A revamped Punjab Kings (PBKS) side will continue their quest for the elusive title in the upcoming edition of the Indian Premier League (IPL 2021), which gets underway on April 9. Formerly known as Kings XI Punjab, the team was renamed as Punjab Kings ahead of the players’ auction last month. Well, we all know what happened when Delhi Daredevils became Delhi Capitals in 2019, and the KL Rahul-led side will look for a similar change of fortunes. After blowing hot and cold last season, Punjab released nine players, including Glenn Maxwell and Mujeeb-ur-Rehman. IPL 2021 Schedule in PDF for Free Download: Get Indian Premier League 14 Venues, Full Time Table, Fixtures and Match Timings in IST.

Having a purse of INR 53.2 crore, Punjab Kings bought 12 players in the bidding event who’ll have the onus to take Punjab to glory. As mentioned above, Punjab had an average campaign last season. Although they performed well as a unit, their tendency to collapse in crunch situations cost them many games. They eventually finished at the sixth position in the final team standings with six wins in 14 games. However, KL Rahul’s men would like to have a far better season this time around. PBKS will kick-start their campaign against Sanju Samson’s Rajasthan Royals at the Wankhede Stadium in Mumbai on April 12. Ahead of the exciting season, let’s look at Punjab’s first-choice playing XI. MI Likely Playing XI in IPL 2021: Check Out Mumbai Indians’ Predicted First Choice Line-Up.

Openers: Karnataka duo KL Rahul and Mayank Agarwal were Punjab’s first-choice openers last season, and the combination is likely to be the same. The skipper, who’ll also keep the wickets, won the Orange Cap for scoring 654 runs last season, while Agarwal, despite missing few games, scored in excess of 400 runs. Mandeep Singh would come in if Rahul or Agarwal sustain injuries or need rest in the middle of the season.

Caribbean dasher Nicholas Pooran also had an impressive IPL 2020, and he’ll again be the cornerstone of Punjab’s batting line-up. Uncapped Shahrukh Khan impressed in Syed Mushtaq Ali Trophy earlier this year, and he’ll pip Sarfaraz Ahmed to take the number six spot. He can also chip in with a few overs if needed.

All-Rounders: Deepak Hooda will handle the all-rounder’s responsibility for Punjab Kings this season. Hooda is a dasher who has played many impressive knocks in IPL. However, he has to deliver with the ball as well. Fabian Allen and Moises Henriques can also be considered for the all-rounder’s slot if Hooda fails to deliver in the initial games.

Bowlers: It would be a toss-up between Murugan Ashwin and Ravi Bishnoi for the other spinner’s slot in the team. The former had a slightly better season last time, and he just might get a not ahead. Mohammed Shami will continue to lead the pace bowling attack. He is coming off an injury, and he’ll have a point to prove. Australia’s Jhye Richardson, who bagged INR 14 crore in the auction, will partner Shami in the fast bowling department. Left-arm pacer Arshdeep Singh will occupy the remaining spot in the side.

(The above story first appeared on LatestLY on Mar 28, 2021 08:17 PM IST. For more news and updates on politics, world, sports, entertainment and lifestyle, log on to our website latestly.com).