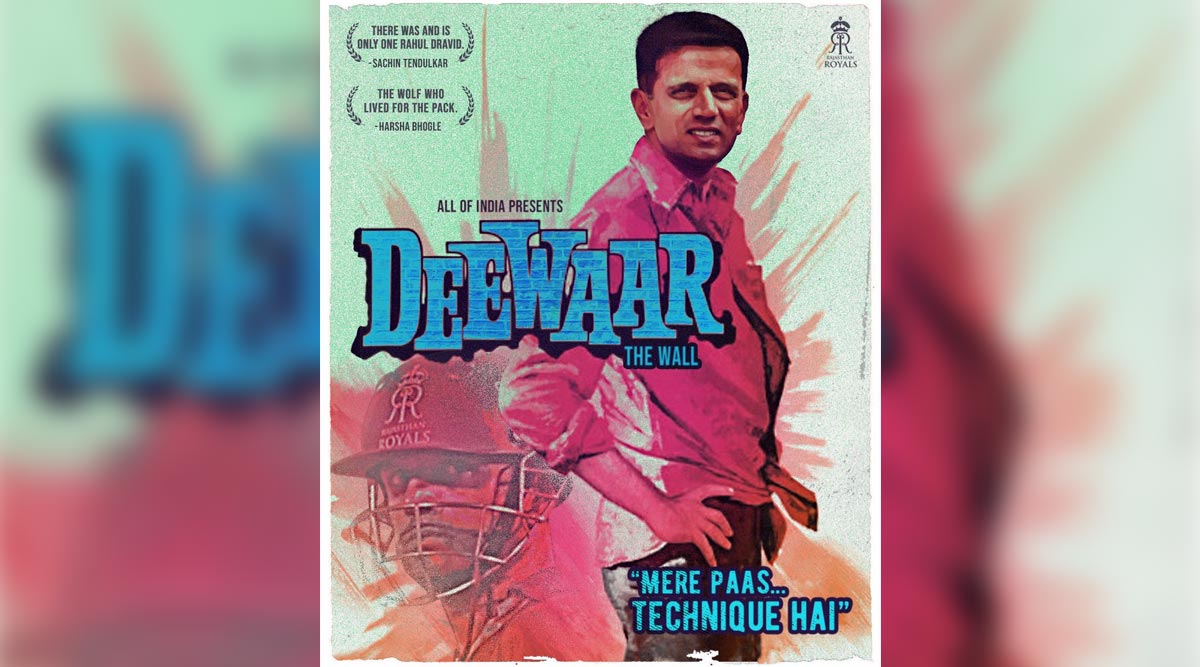 As Rahul Dravid celebrates his 47th birthday, Rajasthan Royals found the best way to pay their tribute to the former Indian star and a cricketing legend. Dravid, who was born on this day in 1973, is celebrated as “The Wall” of Indian cricket for his indomitable contribution to the Indian team with the bat and the innumerable times he saved the team from defeats and humiliations, especially on away tours. The cricketing fraternity congratulated the former Indian captain on his birthday but Indian Premier League franchise Rajasthan Royals, who Rahul Dravid captained and coached in the past, just had the best tribute reserved for the cricket giant. The IPL based team, who Dravid represented for 2 years in the IPL, put out a special caricature which was the rendition of the famous Amitabh Bachchan film “Deewar.” Rahul Dravid Birthday Special: 5 Memorable Knocks By ‘The Wall’ That Is Etched In Every True Blue Indian Cricket Fan's Memory.

Rajasthan Royals not just recreated the poster of the “Deewar” movie but also changed the captions in the caricature. The caption read as “Mere Pass Technique Hai” with Dravid standing tall in the Bachchan pose while in the background a picture of him wearing a Rajasthan Royals helmet can be seen. Rahul Dravid Turns 47: BCCI, Virender Sehwag, VVS Laxman, Mohammad Kaif Wish 'The Wall' With Lovely Birthday Greetings.

20 Years of a Deewar

The banner also includes two famous quotes on the Dravid by his former India teammate and friend Sachin Tendulkar and popular broadcaster Harsha Bhogle. “There was and is only one Rahul Dravid,” Sachin once said talking about Mr Dependable while Bhogle talking about Dravid in a cricketing show once told that the ever-dependable cricketers was “The Wolf who lives for the Pack.” Rahul Dravid Birthday Special: All The Times When The Gentleman of Cricket Won Hearts Off The Field.

The poster was originally from the famous Amitabh Bachchan movie “Deewar” which released in 1975 remains to date one of the ground-breaking masterpieces in Indian cinema. The film, which has now attained iconic status in Indian cinema, cemented Bachchan’s status as the ‘Angry Young Man’. Rajasthan Royals, however, used the name of film “Deewar” to portray Rahul Dravid – called “The Wall” by scores of fans and cricketer lovers in the subcontinent.

From his shaky ODI debut against Sri Lanka in 1996 to ending 1999 ODI Cricket World Cup as the highest run-scorer in the and the several times he rescued team India from precarious situations, Dravid truly proved to be “The Wall” in Indian cricket.