Rohit in 2017, on this day, scored 118 off just 43 balls and reached the three-figure mark off 35 balls. He equalled David Miller’s record of fastest T20I century. 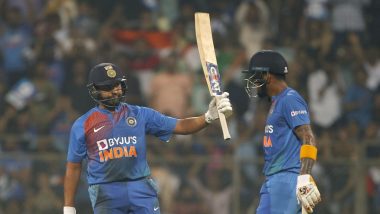 Team India’s opening batsman Rohit Sharma loves Sri Lanka as opponents. Rohit has scored some big knocks against Sri Lanka. Not just the double centuries in One-Day Internationals (ODIs) Rohit has smashed the joint-fastest century in T20Is against the Sri Lanka as well. And that very much tells how he loves their bowling. Rohit in 2017, on this day, scored 118 off just 43 balls and reached the three-figure mark off 35 balls. He equalled David Miller’s record of fastest T20I century. Fans Want Rohit Sharma Back in Team After India Slump to Their Lowest Test Total Ever (See Reactions).

The T20I was held at the Holkar Cricket Stadium in Indore. Batting first, India posted mammoth 260 for five in their allotted 20 overs. Rohit made hefty contribution in the total and during his stay smashed 12 fours and 10 sixes. Rohit’s strike-rate was massive 274.42 as he toyed the the Lankan bowling attack. Why is Rohit Sharma Unavailable for Selection in India vs Australia 2nd Test at MCG?

Apart from Rohit, KL Rahul scored 89 as the openers posted 165. In response, Sri Lankan were bowled out for 172 and thus India won the match by 88 runs. Yuzvendra Chahal and Kuldeep Yadav scalped four and three wickets each in India’s victory.

(The above story first appeared on LatestLY on Dec 22, 2020 01:54 PM IST. For more news and updates on politics, world, sports, entertainment and lifestyle, log on to our website latestly.com).

Comments
Tags:
David Miller fastest century in T20Is Fastest T20I Century IND vs SL 2017 KL Rahul On This Day Rohit Sharma This Day That Year
Comments
You might also like