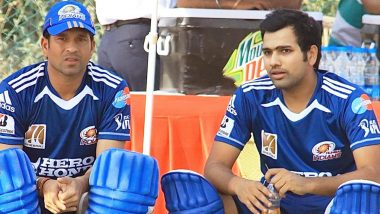 On the occasion of Friendship Day 2020, Rohit Sharma invited his fans for a question for a Q/A session on Twitter. Several stories came out as the Mumbai Indians captain answered many interesting queries of his lovers. During the course of the session, one fan asked Rohit to name one retired Mumbai Indians batsman which he would like to see in his team again. The 33-year-old said that picking one name will not be easy as he picked two players. Unsurprisingly, the first name was of the legendary Sachin Tendulkar while former South African all-rounder Shaun Pollock was Rohit’s other pick. Rohit Sharma Reacts to Suresh Raina’s ‘Hitman Is Next MS Dhoni’ Comment, Says ‘CSK Captain One of a Kind, Shouldn’t Be Compared.’

Tendulkar, the former Mumbai Indians captain, played 78 IPL matches for the franchise in which he scored 2334 runs at an impressive average of 33.83. He played many magnificent knocks for the Mumbai-based team and his selection didn’t surprise anyone. In fact, he also won the orange cap, which is awarded to tournament’s highest run-scorer in IPL 2010. Rohit Sharma Reveals His Favourite Century of 2019 ICC Cricket World Cup Against South Africa.

Q: If you could bring one retired MI player back, who would it be?#AskRo @ImRo45

Speaking of Rohit’s other pick, Pollock, who is regarded as one of the greatest all-rounders ever, played 13 games for Mumbai Indians in 2008. The Proteas star wasn’t able to make a great impact as he took just 11 wickets and scored mere 147 runs. However, the all-rounder was in the twilight of his career while playing for Mumbai and Rohit is well aware of Pollock’s prowess during his prime.

Rohit will be next seen in action in the 2020 edition of the Indian Premier League (IPL). However, he will face a different challenge this time as the tournament is scheduled to be played in UAE. As per reports, all the squads are planning to reach the base by the second or third week of August

(The above story first appeared on LatestLY on Aug 02, 2020 08:52 PM IST. For more news and updates on politics, world, sports, entertainment and lifestyle, log on to our website latestly.com).