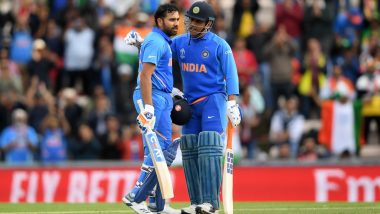 On the occasion of Friendship Day 2020, swashbuckling Indian opener Rohit Sharma decided to interact with his fans as he organized a Q/A session on Twitter. Many interesting stories came out as the right-handed batsman responded to the queries of his lovers. During the course of the session, a fan asked Rohit to give his take of Suresh Raina’s comments over him. Heaping praises on the Hitman, the southpaw called the Mumbai Indians skipper ‘the next MS Dhoni’ owing to his calm nature and captaincy style. However, Rohit didn’t support Raina’s claim as he said that the talismanic wicket-keeper shouldn’t be compared.

“Yes, I heard about that comment from Suresh (Raina). MS Dhoni is one of a kind. Nobody can be like him and I believe comparisons shouldn’t be made like this. Every individual is different and has his own strengths and weaknesses,” said Rohit while responding to Raina’s comment. Friendship Day 2020: From Virat Kohli and AB de Villiers to Rohit Sharma and Yuzvendra Chahal, Top 5 Best Friends.

Q: Raina recently made a comparison between Dhoni and you. Can you explain what you see as most important elements of your captaincy style and how you differ from other captains. #AskRo

Raina, however, wasn’t the first one to draw comparisons between Dhoni and Rohit. Both the players are known for their cool nature and their captaincy style is quite similar too. Rohit is the most successful captain in Indian Premier League (IPL) history with 4 titles while skipper Dhoni is second in the list with three trophies.

All these cricket stars will be next seen in action in the 2020 edition of the Indian Premier League (IPL). However, they will have a different challenge as this time, the tournament is scheduled to be played in UAE. As per reports, all the squads are planning to reach the base by the second or third week of August.

(The above story first appeared on LatestLY on Aug 02, 2020 05:50 PM IST. For more news and updates on politics, world, sports, entertainment and lifestyle, log on to our website latestly.com).