Having helped Rajasthan Royals to a five-wicket win against Chennai Super Kings in Match 68 of IPL 2022 with superb all-round performance, off-spinner Ravichandran Ashwin was elated to get the chance to bat and make a 'double' contribution in the team's victory. 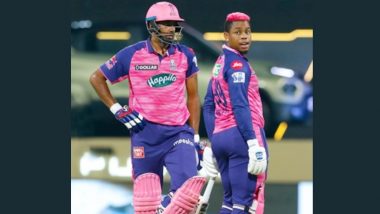 Mumbai, May 21: Having helped Rajasthan Royals to a five-wicket win against Chennai Super Kings in Match 68 of IPL 2022 with superb all-round performance, off-spinner Ravichandran Ashwin was elated to get the chance to bat and make a 'double' contribution in the team's victory. Ashwin claimed 1/28 with the ball as he helped Rajsthan Royals claw their way back into the game after CSK had blasted 75/1 in powerplay, thanks mainly to Moeen Ali, who smashed a 19-ball half-century. Shimron Hetmyer ‘Will Be Missed’ on West Indies’ Tour of Netherlands and Pakistan, Says Assistant Coach Roddy Estwick.

Ashwin then came back to contribute with the bat as well, scoring 40 runs off 23 balls as Rajasthan Royals successfully chased 151. "Feels like a million dollars. It was a special day for us. Finishing with a win and getting two bites of the cherry was important," said Ashwin after being adjudged Player of the Match for his all-round performance. The seasoned off-spinner said he had been promised that he would be promoted up the order in batting and get a chance to play in the powerplay if he worked on his batting.

"The communication (from the team management) was clear before the season on what I needed to work on. The management had ensured my role was well defined, I opened in practice games. I was told I'll play in the powerplay but not at the death (laughs)," he said. About bowling in T20 matches, Ashwin said his role is to force the batters to take risks. "In T20, you can't chase wickets. I have to make batters take risks. Sometimes, they don't and I'll have to bowl for the other end. I have understood the game well and am innovative," Ashwin said. RR vs CSK, IPL 2022: Yashasvi Jaiswal, Ravichandran Ashwin Guide Rajasthan Royals to 5-Wicket Win Over Chennai, Climb Second Spot in Points Table.

The 35-year-old from Chennai said that the CSK trainers and strength specialists have encouraged him to work on his physical fitness, which has resulted in him hitting three big sixes on Friday. "I don't have enough power, credit has to go to Rajamani (Prabhu, Strength Specialist) and Zubin Bharucha. They've understood my nature and that I don't bat the same (in) every game. They've encouraged me and I've practiced a lot," said Ashwin. About playing for a new franchise, Ashwin said, "I want to play my A-game for all franchises I play for. It's a mark of respect. Glad we're in the playoffs," he said.

(The above story first appeared on LatestLY on May 21, 2022 11:09 AM IST. For more news and updates on politics, world, sports, entertainment and lifestyle, log on to our website latestly.com).