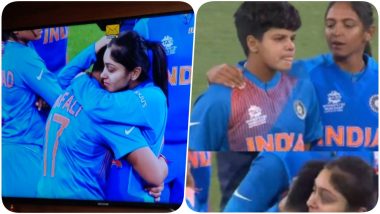 India faced a disappointing loss against Australia by 85 runs in the finals of the Women’s T20 World Cup 2020 which happened at Melbourne Cricket Ground. Needless to say that the Indian team was quite disappointed with the loss. 16-year-old Shefali Verma was who couldn’t control herself after the defeat and the broke down into tears. The youngster was then consoled by Indian senior Smiriti Mandhana. The Indian team lost the game by 85 runs and walked away with the cup for the fifth time. IND vs AUS ICC Women’s T20 World Cup Final 2020 Stat Highlights: Australia Crush India by 85 Runs to Win Record Fifth Title.

Talking about the Indian opening batter she could only contribute with two runs and then was sent packing by Megan Scutt as the Women in Blue chased a total of 184 runs. The total by the Indian team happens to be the highest total in the World Cup 2020 finals for men and women. Needless to say, the youngster was quite upset with herself as she could not give her best on the big stage. The video of Shefali Verma breaking down into tears went viral on social media.

It's ok Shafali verma, you've achieved more than what a 16 year old can do 🔥🔥 don't be sad 😭😭 We are proud you #shafaliverma #T20WorldCup #INDvAUS #TeamIndia pic.twitter.com/c4Pdxi2ryE

Talking about the game, the Australian team won the toss and elected to bat first. They posted a total of 184 runs with Beth Mooney, Alyssa Healy scored a half-century each. In reply, the Indian women’s team dwindled like a pack of cards and could not even reach a total of 100 runs. Deepti Sharma scored the highest runs for the team as she scored 33 runs.

(The above story first appeared on LatestLY on Mar 08, 2020 05:10 PM IST. For more news and updates on politics, world, sports, entertainment and lifestyle, log on to our website latestly.com).