West Indies assistant coach Roddy Estwick on Friday said that Shimron Hetmyer "will be missed" during his team's twin tours of Netherlands and Pakistan after the left-hander's excellent IPL 2022 season for Rajasthan Royals. 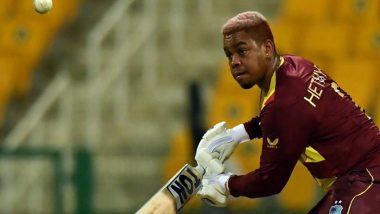 St John's (Antigua), May 21: West Indies assistant coach Roddy Estwick on Friday said that Shimron Hetmyer "will be missed" during his team's twin tours of Netherlands and Pakistan after the left-hander's excellent IPL 2022 season for Rajasthan Royals. Hetmyer has not made an international appearance since the T20 World Cup last year. He has missed all of West Indies' bilateral series in the last six months, either because of personal reasons or on fitness grounds. The attacking batter has returned to the IPL for the final stages of the season after leaving the tournament's bubble to be present for the birth of his son, but made himself unavailable for West Indies' upcoming tours to the Netherlands and Pakistan in order to spend time with his family. RR vs CSK, IPL 2022: Yashasvi Jaiswal, Ravichandran Ashwin Guide Rajasthan Royals to 5-Wicket Win Over Chennai, Climb Second Spot in Points Table.

"If someone like Hetmyer is not playing, you're obviously going to miss his talent. He's having an outstanding season for Rajasthan Royals. He's doing very, very well. He's playing well,'' ESPNcricinfo quoted Estwick as saying. "He will be missed, but at the end of the day, he's not there. He's asked not to be selected for this tour so we have to get on without him and we hope that he will make himself available for future tours,'' he added. The assistant coach also confirmed that West Indies players, who are part of the ongoing IPL 2022, would fly straight to the Netherlands once their respective franchises' seasons have ended. IPL 2022 Playoffs: Rajasthan Royals Secure Qualification For First Time Since 2018.

Nicholas Pooran and Romario Shepherd (both Sunrisers Hyderabad) will travel after the group stage, Kyle Mayers (Lucknow Super Giants) and Alzarri Joseph (Gujarat Titans) will both be involved in the playoffs, while Rovman Powell's itinerary will depend on whether Delhi Capitals beat Mumbai Indians in their final group game on Saturday. "Our expectation is to win all three ODIs [in the Netherlands] but it's not going to be easy. Remember, a lot of the players won't have played in conditions like the ones we'll encounter in the Netherlands,'' he said. "It's about how quickly we adjust to conditions. We've only got a couple of days' practice before we go into the first ODI so it's all about adjusting and getting used to the conditions and then executing plans as well as possible,'' he added. West Indies' series in the Netherlands comprises three ODIs in Amstelveen on May 31, June 2 and 4, while the tour of Pakistan involves three ODIs in Rawalpindi on June 8, 10 and 12.

(The above story first appeared on LatestLY on May 21, 2022 10:52 AM IST. For more news and updates on politics, world, sports, entertainment and lifestyle, log on to our website latestly.com).