South Africa vs West Indies takes place at the Dubai International Stadium. The match has a start time of 3:30 PM IST. West Indies have plenty to ponder after their batting debacle against England in the opener. 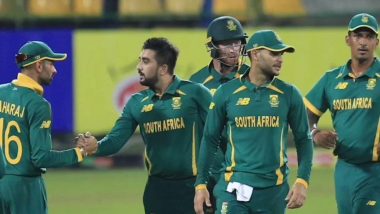 South Africa and West Indies have both lost their opening games in the World T20 which makes their clash at Dubai assume added significance. West Indies put in a shambolic performance as they were bundled out for 55 against England. The defending champions in particular struggled against the slow bowlers and drastic improvement is needed in their batting if they are to do well against the Proteas. Opponents South Africa were involved in a low scoring clash against Australia which they went on to lose but did put in some efforts to make a good contest. Both the teams need that first win to get their confidence back.  SA vs WI Preview: Likely Playing XIs, Key Battles, Head to Head and Other Things You Need To Know About T20 World Cup 2021 Match 18.

Quinton de Kock at the top of the order holds the key for South Africa as he is the one that can get them off to a flying start. David Miller and Heinrich Klassen’s lack of form is a huge worry for the Proteas and they may have to find a way to get Reeza Hendricks in the line-up. In Kagiso Rabada and Anrich Nortje, there are two top T20 bowlers who can put real pressure on West Indies.

West Indies have plenty to ponder after their batting debacle against England in the opener. A number of batsmen went out playing rash shots where effectively they could have utilised their time getting their sights on. Once again question marks will be raised on the inclusion of Chris Gayle, who has been out of form for a long time now. Roston Chase may find himself in the playing eleven given the conditions. ICC T20 World Cup 2021 Schedule in IST, Free PDF Download Online.

Star Sports are the official broadcasters of T20 World Cup 2021 in India and will be telecasting the games live on its channels, Fans can tune into Star Sports channels to watch SA vs WI match telecast on their TV sets.

Disney+ Hotstar, the official OTT platform, will provide the live streaming of T20 World Cup 2021 on online platforms in India. Fans can tune into the Disney+ Hotstar app and website to watch South Africa vs West Indies match online. West Indies have always performed well when they are under fire and they will likely find a way to beat South Africa today.

(The above story first appeared on LatestLY on Oct 26, 2021 10:37 AM IST. For more news and updates on politics, world, sports, entertainment and lifestyle, log on to our website latestly.com).