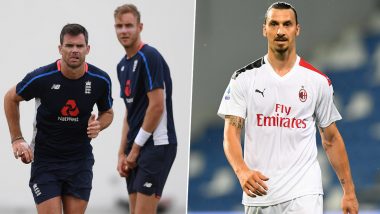 AC Milan star Zlatan Ibrahimovic is certainly ageing like fine wine and is only getting better with time. The 38-year-old striker has been enjoying a great run in the ongoing Serie A 2020 and is not likely to hang up his boots anytime soon. Recently, in fact, the Swedish star took his official Twitter account and claimed that he can play at his prime till the age of 50. Fans were impressed by Zlatan’s determination as the filled the comment section in a jiffy. However, when England pacer Stuart Broad came to the football star’s post, he claimed that his partner-in-crime James Anderson is also aiming something similar. Hard for Stuart Broad, James Anderson to Play Together in Australia, Feels Peter Siddle.

“Sound alike @jimmy9,” Broad commented on Ibrahimovic’s post. Just like the Sweden star, Anderson is also 38 but retirement looks far away from him. The Lancashire-born bowler, who made his international debut way back in December 2002, is the most successful fast bowler in the history of Test cricket with 589 wickets. On many occasions, the legendary pacer was asked about his retirement plans. However, Anderson made it crystal clear that he aims to serve England cricket for a long time to come. Zlatan Ibrahimovic Transfer News Update: AC Milan Confident of Extending Swedish Striker’s Stay.

Meanwhile, let’s look at how Broad reacts to Ibrahimovic’s claims. With, both Anderson and Ibrahimovic looking determined to play in the years to come, it will be interesting to see who bids adieu to their respective sports first. Anderson and Broad will next be seen in action in the forthcoming three-match Test series against Pakistan, starting from August 5. While, Ibrahimovic will next take the field when Milan take on Cagliari in their last Serie A game on August 2.

(The above story first appeared on LatestLY on Aug 01, 2020 06:42 PM IST. For more news and updates on politics, world, sports, entertainment and lifestyle, log on to our website latestly.com).