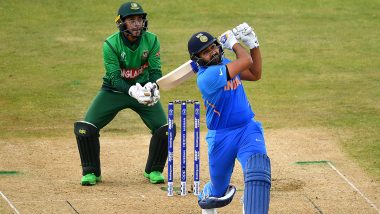 Cricket fans must be badly missing the action in the gentleman’s game amid the COVID-19 crisis. However, good news for them is that International cricket will resume in just a week time with the Test series between England and West Indies. In the meantime, we can relish some moments from the games which have been played in the past. In this article, we’ll talk about the India vs Bangladesh game from the 2019 World Cup which was played on exact this day (July 2). Virat Kohli and Co lost their previous game against host England and were aiming to make a thumping comeback. On the other hand, the Bangla Tigers were almost out of the semi-final race and were playing for pride. This Day That Year: England Defeat India by 31 Runs in ICC Cricket World Cup 2019 Despite MS Dhoni’s Unbeaten Knock.

The Men in Blue won the toss in Birmingham and opted to bat first. The decision proved to be impeccable as the opening pair of Rohit Sharma and KL Rahul got India off to a flying start. The duo added 180 runs for the first wickets as India were well on command. Rahul was dismissed after scoring 77 runs while Rohit went on to score his 4th century of the tournament.

However, the middle order couldn’t capitalize onto the start as left-arm pacer Mustafizur Rehman bowled a stellar spell. He dismissed the likes of Virat Kohli, MS Dhoni and Hardik Pandya to claim his third ODI five-wicket haul against India. Nevertheless, India still manages to post a challenging total of 314-9.

Another #CWC19 match, another Rohit Sharma hundred 🙌#OnThisDay last year, Mustafizur Rahman claimed a five-for in a losing cause as India sealed a 28-run win over Bangladesh.

Log in to the ICC vault for exclusive extended highlights of the game 🎥 https://t.co/nSKrA5omVh pic.twitter.com/dhHGvCmBmg

In reply, the Bangla Tigers tried to make a fightback as everyone from the top-order got good starts. However, none of them were able to play a match-defining knock like Rohit or Rahul. Shakib Al Hasan (66) was their highest run-getter while Mohammad Saifuddin scored a quick-fire 51. For India, Jasprit Bumrah took four wickets while Hardik Pandya dismissed three batsmen.

As a result, Mashrafe Mortaza and Co were bundled out for 286 and lost the game by 28 runs. Rohit Sharma was adjudged the Man of the Match for his brilliant ton. With this, India cemented their spot in the semi-finals while Bangladesh were knocked out of the tournament.

(The above story first appeared on LatestLY on Jul 02, 2020 02:53 PM IST. For more news and updates on politics, world, sports, entertainment and lifestyle, log on to our website latestly.com).