Suresh Raina smashes India's first-ever T20I century with a masterclass innings against South Africa at the 2010 ICC T20 World Cup in the West Indies. His knock of 101 from 60 deliveries made him only the third cricketer to score a T20I hundred and first from India. Raina's brilliance helped India overturn a difficult situation and set a stiff target for South Africa. 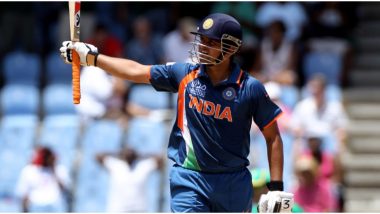 Suresh Raina is undoubtedly one of the best T20I cricketers in the world and perhaps among the great ever when it comes to the shortest form of the game. And if there were any doubts about his credibility as the leading cricketer in Twenty20 internationals, Raina killed it all with what was then only the third century in T20I cricket. Batting at first down in a World Cup group match against South Africa, with both openers back in the hut, it actually came as a big surprise when Raina hit the hundred or closer to be getting towards one. Centuries in T20I cricket wasn’t a regular fixture then as it is now – only Chris Gayle and Brendon McCullum had done it before. But on this day (May 02), Raina became only the third centurion in Twnty20 internationals. Suresh Raina Backs Rishabh Pant’s Quality, Says He Is As Dominant As Sachin Tendulkar, Virender Sehwag.

Coming to bat with the score reading 4/1 – Murali Vijay has just been dismissed for a first-ball duck – Raina lost partner Dinesh Karthik with three deliveries in the powerplay still remaining. Karthik was timing it well while Raina missed and fretted as South Africa welcomed him with a barrage of short-pitched deliveries. His struggling stay looked to have ended when Morne Morkel had him caught but off a no-ball and the southpaw made most of the second life, one that almost didn’t exist the first time he batted. Suresh Raina Relives His Debut ODI Match Against Sri Lanka, Shares Video of His Brilliant Run-Out (View Post).

After withstanding the pace battery, Raina and Yuvraj both came to life when spin was introduced. They had managed just 43 off the first eight overs. India would go on to add 143 off the next 12 overs. More than 80 runs of that total came from Raina’s bat. It must be said he was lucky with his mis-hits missing fielders and finding boundaries but with an innings of 101 from just 60 deliveries, which included nine boundaries and five maximums, Raina showed how devastating he could be.

The turnaround happened mostly in the ninth over when Roelof van der Merwe came to bowl his one and only over of the match and gave away 13 runs. Raina was on 19 from 22 and Yuvi 5 off 9. The former found a rare timing with an inside-out drive for his third boundary and Yuvraj swept a six to open the gates. Jacques Kallis came to bowl the next over and Raina slogged him for a maximum to signal the turnaround had started.

Raina stitched 88 for the fourth wicket with Yuvraj and by the time the latter departed after skying one to Protea skipper Graeme Smith, Raina was in fine fettle. He took 18 off Rory Kleiveldt’s final over to move from 75 to 93 and smashed Albie Morkel into the cow corner to complete his century from 59 deliveries.

India reached 186/5 at the end of 20 after being 43/2 in eight overs. Raina shifted gears quite incredibly after Yuvraj’s dismissal scoring 83 off the last 38 deliveries he faced. India went on to win the match by 14 runs with South Africa only managing to score 172 in 20 overs.

(The above story first appeared on LatestLY on May 02, 2020 12:50 PM IST. For more news and updates on politics, world, sports, entertainment and lifestyle, log on to our website latestly.com).