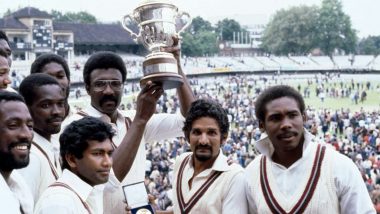 West Indies might not be one of the strongest cricket teams in the modern era. However, there was a time when the Caribbeans used to rule World Cricket. Courtesy a destructive batting line-up and a lethal pace attack, the Calypso Kings won the first two editions of the World Cups. In fact, it was this day only (June 23) when they Clive Lloyd and Co defeated England in the finals and lifted their second World Cup title in 1979. As the historic triumph completes 41 years, we’ll revisit the encounter at Lord’s. This Day That Year: West Indies Defeat Australia to Lift the Inaugural World Cup Title in 1975.

After winning the toss, England captain Mike Brearly decided to field first at the Mecca of Cricket. The decision seemed brilliant at first as openers Gordon Greenidge and Desmond Haynes were dismissed with just 36 runs on the board. However, Sir Vivian Richards came to bat at number three and brought the Caribbean innings back on track. He was supported by Collis King who unleashed an absolute against the English bowlers. The likes of Ian Botham and Mike Hendrick looked completely against the duo.

Richards went on to score a sensational hundred (138) while Kings scored 86 runs off just 66 balls. Riding on their brilliance, West Indies piled up a massive score of 286/9.

#OnThisDay in 1979 West Indies won their second @cricketworldcup title after a crushing 92-run victory over England in the final.

Viv Richards scored a fantastic 138* before Joel Garner picked up five wickets, as 🌴 defended their title at Lord's 🏆 pic.twitter.com/vqmRBI7BVt

The visitors looked favourites to win the title. However, the story wasn’t over as England openers Geoffrey Boycott and Mike Brearly got their side off to a flier. The duo brilliantly tackled the Caribbean pacers and also helped England cross the 100-run mark. Both the batsmen also went to score their individual half-centuries as England were cruising towards victory.

At the score of 129, however, Michael Holding dismissed Brearley and gave his side the first breakthrough. Soon, the right-arm pacer also dismissed Boycott and West Indies were back in the contest. The England middle order couldn’t show resistance as Joel Garner and Coin Croft ran through their batting line-up. Wickets were falling in a cluster and England were out of the contest. Garner bagged a five-fer as England were bundled out for 194 runs and lost the game by 92 runs. Sir Vivian Richards bagged the Man of the Match award as Clive Lloyd and Men lift their second World Cup title.

(The above story first appeared on LatestLY on Jun 23, 2020 03:44 PM IST. For more news and updates on politics, world, sports, entertainment and lifestyle, log on to our website latestly.com).