Ahead of the start of the first Test between New Zealand and West Indies, Kane Williamson was seen embracing rival fast-bowler Kemar Roach. The Windies pacer recently lost his father and was not able to attend the last rituals of his late father. 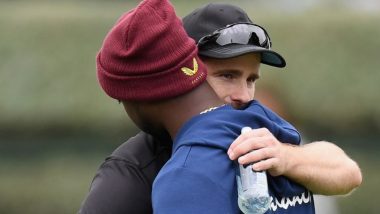 New Zealand captain Kane Williamson is a perfect ambassador of ‘gentleman’s game’. Ahead of the start of the first Test between New Zealand and West Indies, Williamson was seen embracing rival fast-bowler Kemar Roach. The Windies pacer recently lost his father Andrew Smith. Roach was not able to attend the last rituals of his late father as he was with the national team. New Zealand vs West Indies 1st Test 2020 Live Streaming Online and Match Timings in India: Get NZ vs WI Free TV Channel and Live Telecast Details.

Meanwhile, as a mark of respect both West Indies and New Zealand cricket team players in the first Test at Seddon Park wore black armbands to honour Kemar Roach’s father. As the images of Williamson hugging Roach went viral, the New Zealand was praised for being compassionate enough. Here are some of the reactions:

Kemar Roach lost his father recently. Even more respect for Kane Williamson for this show of support.#NZvWI #NZvsWI pic.twitter.com/wiMsTIeueq

Sir Kemar Roach WI fast bowler's father yesterday passed away and today he played for his team. Kane Williamson went to him and hugged each other.

At the close of play on the opening day, New Zealand batting first were 243 for two. Skipper Williamson and Ross Taylor were the two unbeaten batsmen at 97 and 31 respectively. Apart from Williamson, opening batsman Tom Latham scored 86 before he was dismissed by Roach. Williamson, who will be eyeing his century on day two, also became the second cricketer to score 1000 Test runs at Seddon Park, he joined Taylor.

(The above story first appeared on LatestLY on Dec 03, 2020 12:49 PM IST. For more news and updates on politics, world, sports, entertainment and lifestyle, log on to our website latestly.com).