Royal Challengers Bangalore (RCB) teammates Virat Kohli and AB de Villiers had a live session on Instagram. The two cricket stars talked about a range of topics from cricket to personal lives. After a request from fans, the duo also picked a combined ODI XI featuring Indian and South African players. MS Dhoni was captain of the team jointly by Kohli and de Villiers. 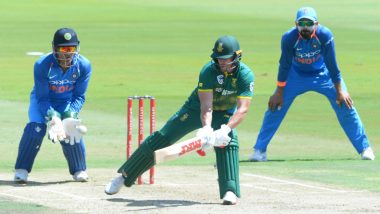 The duo named Sachin Tendulkar and Rohit Sharma as openers with Kohli at one down, followed by de Villiers. Former South African all-rounder Jacques Kallis and former Indian batsman Yuvraj Singh completed the middle-order. Dhoni apart from captaincy role was named as wicketkeeper as well.

Interestingly, Kohli and de Villiers' RCB teammate and spinner Yuzvendra Chahal was also named in the XI. The fast bowling trio in the XI comprises of Dale Steyn, Jasprit Bumrah and Kagiso Rabada. Kuldeep Yadav, Ravindra Jadeja and Morne Morkel were named as backup players. AB de Villiers Recalls His First Interaction With Virat Kohli in 2011, Says ‘I Didn’t Trust the Guy Back Then’.

Both Kohli and de Villiers were in sync when naming Dhoni as skipper of the team. "For me, MS (Dhoni), MS is probably the most balanced choice," said Kohli. "I am happy with that choice. I have never played under MS. But I have a world of respect for him. The way he carries himself on and off the field. I mean, he is always calm and he knows the game well. So I am happy with that," added de Villiers.

(The above story first appeared on LatestLY on Apr 25, 2020 11:18 AM IST. For more news and updates on politics, world, sports, entertainment and lifestyle, log on to our website latestly.com).