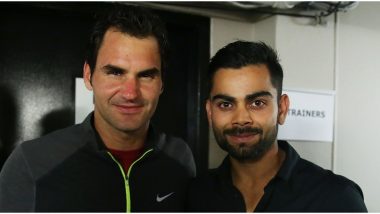 Far from the Cristiano Ronaldo-Lionel Messi comparisons, AB de Villiers found himself comparing Virat Kohli and Steve Smith as to who among the two was the better batsman. And much like his candid batting, De Villiers’ reply was quite the unexpected with the former South African batsman drawing an analogy from the tennis book to reveal his pick for the better player among both superstars. Virat is a more natural striker of the ball, he is like Roger Federer of cricket while Smith is the Nadal, said the 36-year-old when asked by fans to pick his choice between Kohli and Smith. De Villiers, who plays alongside Kohli at Royal Challengers Bangalore in the IPL, also picked the Indian and RCB captain as the best batsman while chasing. AB de Villiers Recalls His First Interaction With Virat Kohli in 2011, Says ‘I Didn’t Trust the Guy Back Then’.

"It's difficult (to pick between Kohli and Smith). Virat is definitely the more natural ball striker. Smudge (Smith) is also up to that,” De Villiers said when asked to compare Kohli with the World No 1 Test batsman Steve Smith during a live Instagram interview session with former Zimbabwe cricketer Pommie Mbangwa. KL Rahul Picks AB de Villiers as His All-time Favourite Batsman.

"Let's do it in tennis terms. Virat is like Federer, Smith is more like (Rafael) Nadal. He's (Smith) mentally very strong and figured out a way of scoring runs, he looks odd at the crease, doesn't look natural but he ends up breaking records and doing amazing things at the crease,” said De Villiers explaining why he feels Kohli reminds him of the Swiss Maestro. “But my pick is Virat, who is more of a natural ball-player. He's scored runs all over the world, won games under pressure so he's my pick.”

That, however, wasn’t just it. Fans put him in a more difficult position when they asked him to pick between Kohli and Sachin Tendulkar. While Tendulkar is one of the greatest ever to play the game of cricket, Kohli is long on his heels and looks destined to break several records set by the master blaster. De Villiers revealed that while Tendulkar is a role model to both him and Kohli, there was perhaps no one better than the current Indian skipper when it came to chasing down lofty targets.

"Sachin for both (him and Kohli) of us is like a role model. The way he stood out back in the day in his era and the things he achieved and with the grace he did all of that, its a great example for everyone,” said the former South African batsman. "I think Virat will also say that he's (Tendulkar) the main guy, he's the dude. He set the standards for guys like us to follow. Personally for me, specially in a chase I'd say Virat is the best I've ever seen in my life. There's no-one that beats him when it comes to... the opposition scores 330 and you've got to go chase it down,” he added.

"Sachin was amazing in all formats, all sorts of situations but Virat tops him there when it comes to chasing under pressure. For me, that's where I rate sportsman, when it comes to tennis, golf... the Tiger Woods of the world. When the heat is really on you feel like your whole body is numb, but he (Kohli) stands up and he does amazing things. That's what Virat does under pressure," said De Villiers.

He has tipped to make his comeback into international cricket with South Africa and is said to have made himself available for the upcoming ICC 2020 T20 World Cup in Australia, which is scheduled to be held in October-November. The 36-year-old announced his retirement from international cricket abruptly in 2018 following an alleged misunderstanding with cricket South Africa over his availability for all international tours. But de Villiers has already expressed his interest to make his return.

(The above story first appeared on LatestLY on May 12, 2020 10:23 AM IST. For more news and updates on politics, world, sports, entertainment and lifestyle, log on to our website latestly.com).