Virat Kohli Is Yet To Be Dismissed by Pakistan in T20 World Cups! Take a Look at Indian Captain’s Knocks Against Arch-Rivals Ahead of IND vs PAK T20 World Cup 2021 Clash

The Indian captain would take the field with a unique record with him against Pakistan in T20 World Cups. He has never been dismissed by the Men in Green in this competition as he has always played crucial knocks in India chasing down totals. Would there be a change in this narrative on Sunday or would a new chapter be added to this list? 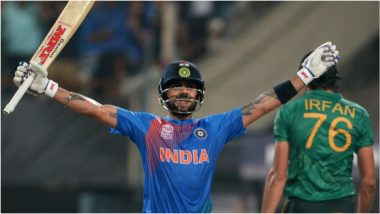 An India vs Pakistan cricket match at a T20 World Cup on a Sunday--well, nothing really gets better than this and if there's one man who has consistently risen and performed on this big stage, it is Virat Kohli. The 32-year is about to play to his first match as captain in the T20 World Cup against Pakistan on October 24 and once again, the spotlight would be on him to perform and potentially win the match for India. But the expectation that Kohli would play a match-winning innings against Pakistan is not a baseless one. Not just because he has won so many matches for India in the past but because Kohli has been a constant thorn in Pakistan's stride, whenever it came to T20 World Cup clashes. India vs Pakistan, ICC T20 World Cup 2021: Here’s Virat Kohli’s Record Against Traditional Rivals in T20Is

The right-hander, back in 2012 was at the prime of his powers and he gave a glimpse of why he would turn out to be a world-beater with a stylish 78 unbeaten runs off just 61 deliveries. The target was not much--just 129 runs but Kohli made short work of it, hitting eight fours and two sixes to close the match for India in just 17 overs with eight wickets to spare. A worthy mention has to be made of his bowling skills as well--taking a wicket in three overs while conceding 21 runs. Overall, it was a Man-of-the-Match performance and India safely extended its winning run over Pakistan in T20 World Cups.

Another T20 World Cup and another low total to chase down. Pakistan were restricted to just 130/7 in a good performance by the Indian bowlers. India also got off to a good start with a willow, with a 54-run opening partnership between Rohit Sharma and Shikhar Dhawan. But three wickets fell in no time and Pakistan sniffed a comeback. But that was not to be as Kohli anchored the chase from then on, scoring 36 runs in style, mixing aggression with caution. He hit four fours and one six to seal the win for India in 18.3 overs.

It was a rainy evening in Kolkata and there are reasons why this knock would be the most memorable one on this list. Once again Pakistan batted first and got off to a slow start. The Indian bowlers were too good for them that day and hence, restricted them to 118/5 in 18 overs, (the number of overs were reduced for a rain interruption).  The chase looked easy but it was not. India lost three quick wickets and once again, the onus was on Kohli to deliver. And boy, he did! On a pitch where other batsmen found it difficult to get going, the right-hander struck 55 unbeaten runs off 37 balls with seven fours and one six. The best part of this knock was that he played it in front of his idol Sachin Tendulkar, seated in the stands and bowed down to him in a memorable moment.

Well, five years have passed and both teams have gotten stronger. It would once again be a memorable match undoubtedly when these two sides clash at the T20 World Cup 2021 in Dubai and another chapter is about to get added to this rivalry. Will Kohli once again prove to be Pakistan's nemesis, or would the Men in Green finally get him this time? Well, stay tuned to find out the answer!

(The above story first appeared on LatestLY on Oct 23, 2021 10:31 PM IST. For more news and updates on politics, world, sports, entertainment and lifestyle, log on to our website latestly.com).