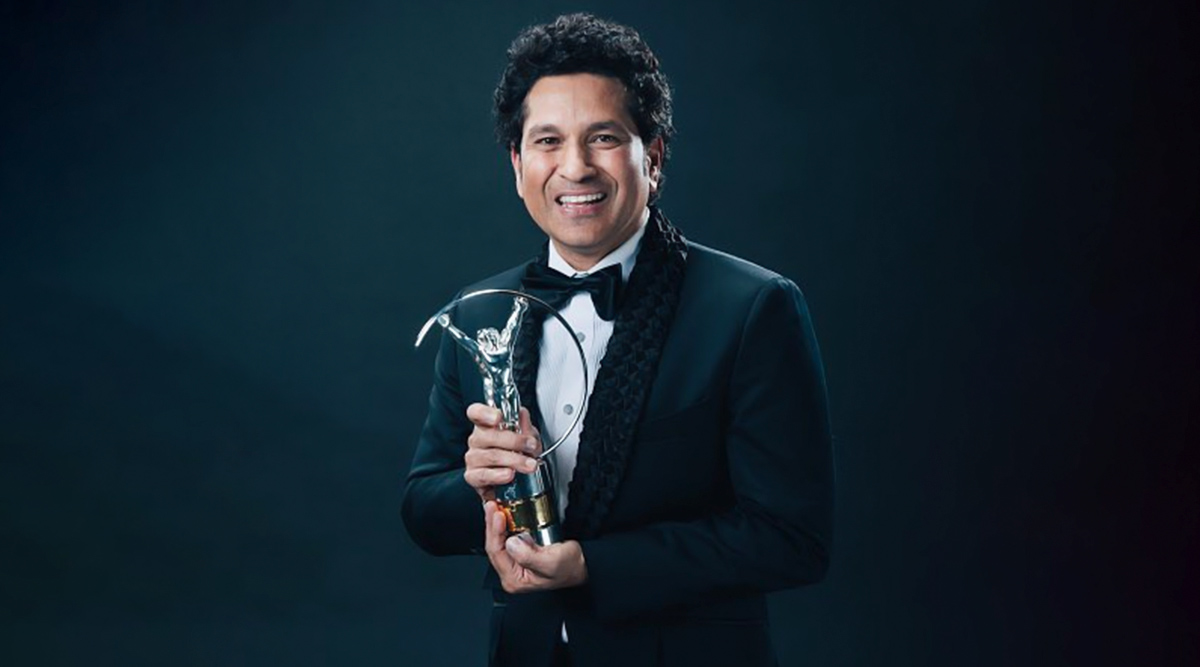 Virat Kohli, Suresh Raina and Yusuf Pathan joined the cricket fraternity in congratulating Sachin Tendulkar, whose iconic victory lap post India’s 2011 World Cup triumph was voted the Laureus best sporting moment in the last two decades. Tendulkar, who won the coveted ICC Cricket World Cup trophy in his sixth and final attempt, went on a victory tour of the Wankhede Stadium seated on the proud shoulders of Kohli, Raina and Pathan after India beat Sri Lanka in the 2011 World Cup final to lift the title after a wait of 28 years. Many from the cricketing fraternity, including apex cricket board ICC, took to social media to congratulate the Master Blaster for the honour. Sachin Tendulkar’s Victory Lap Post India's 2011 World Cup Triumph Named Ultimate Sporting Moment of Last Two Decades.

“Thank you all for the overwhelming love and support!’ Tendulkar wrote in a nostalgic post. "I dedicate this Laureus Sport award to India, all my teammates, fans and well-wishers in India and across the world who have always supported Indian cricket." He had also received enormous praise for his powerful speech at the Verti Music Hall in Berlin after he had received the honour from former Australian captain Steve Waugh. Tennis legend Boris Becker was also on stage to announce the winner of the Best Sporting Moment 2001-2020 award.

Thank you all for the overwhelming love and support!

I dedicate this @LaureusSport award to India 🇮🇳, all my teammates, fans and well wishers in India and across the world who have always supported Indian cricket.#SportUnitesUs #Laureus20 #SportForGood pic.twitter.com/wiqx0D9e2E

“A great achievement and a proud moment for our nation,” wrote current Indian captain Virat Kohli. Kohli was 23 and part of the victorious Indian World Cup team. His then-teammate Suresh Raina wrote “You never fail to make the nation proud. That moment from WC11 still gives us goosebumps, such an emotional & overwhelming memory for all of us.” Yusuf Pathan joined in too in congratulating Sachin. Pathan, who was one of three players that hoisted Sachin on his victory lap, wrote: “You shouldered country's burden for 24 long years. Carrying you on our shoulders was a goosebumps moment for me.”

Congratulations Sachin paaji on being honoured with the prestigious Laureus Sporting Moment Award. A great achievement and a proud moment for our nation. 🇮🇳 @BCCI @sachin_rt https://t.co/cWOfAuBB6i

That moment from WC11 still gives us goosebumps, such an emotional & overwhelming memory for all of us.

So wonderful to see more & more feathers added to your cap! pic.twitter.com/dgYSbHPRSN

A Proud Moment for India!!

A proud moment for India. You shouldered country's burden for 24 long years. Carrying you on our shoulders was a goosebumps moment for me. Congratulations @sachin_rt paaji on winning the prestigious #Laureus20 best sporting moment award. pic.twitter.com/O8Sg4GBR1I

Tendulkar being carried by his teammates after wc win is one of the greatest moment of Indian cricket and Laureus awards it as the Best Sporting Moment of the last 20 years. Congratulations Paaji @sachin_rt #respect pic.twitter.com/hlfD0qGz8m

If winning hearts on the field wasn't enough, he started winning it off the field as well! ❤️

Congratulations to the Master Blaster @sachin_rt paaji for winning the Laureus Sporting Moment Award and making all of us proud!#Laureus20 pic.twitter.com/3ahdvqwZhV

Congratulations @sachin_rt sir on winning a prestigious award 😊 That moment in 2011 was one that no Indian cricket fan will ever forget. Still get goosebumps thinking about it. pic.twitter.com/i8u5isOG8K

Proud of Sachin Tendulkar for Inspiring Another Generation

Proud of you @sachin_rt for your career, for the person you are and for inspiring another generation. You symbolise the power of sport to bring joy and hope and unity. https://t.co/ODn9OX8bKY

Tendulkar’s iconic moment was titled ‘Carried on the Shoulders of A Nation.’ Sachin beat five other nominees to the honour. He was instrumental in India reaching the final in the first place. Tendulkar was the Man of the Match for his innings of 82 in the semi-final against Pakistan which was the ultimate difference in India progressing to the final at the expense of their arch-rivals.

Meanwhile, footballer Lionel Messi and F1 racer Lewis Hamilton shared the World Sportsman of the Year 2019 award. It was the first time the honour was shared. US gymnast Simona Biles won the Sportswomen of the year. South Africa Rugby team was named the Sports Team of the Year while basketball legend Dirk Nowitzki was given the Lifetime Achievement Award.