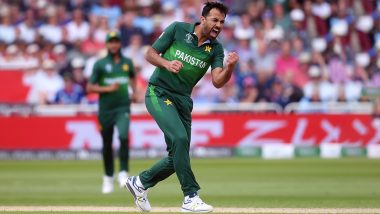 Pakistan cricket team pace bowler Wahab Riaz dismissed Jonny Bairstow in the 9th over of England's inning. England is chasing a mammoth target of 349 runs and they have already lost both their openers Jason Roy and Bairstow in first 10 overs. Bairstow scored 32 runs from 31 deliveries. Skipper Eoin Morgan also got bowled by Mohammad Hafeez in the 15th over. This wicket becomes special for Riaz as he takes his first ODI wicket in 787 days. Pakistan vs England Live Cricket Score 6th ODI Match.

Wahab Riaz was included in Pakistan cricket team world cup squad after their team poor bowling performance against England in 5 matches bilateral series. Pakistan lost that series 4-0 to the English side. Riaz has played 80 ODIs so far and has taken 102 wickets with an economy of 5.71. PAK vs ENG, ICC Cricket World Cup 2019 Live Cricket Updates: Eoin Morgan BOWLED on 9.

That's how you celebrate your first ODI wicket in 787 days! 🙌 pic.twitter.com/oEOCk7Y2rq

Earlier England skipper Eoin Morgan won the toss and chose to field. Pakistan batted well to put on a total of 348. Fakhar Zaman and Imam ul Haque gave a good start to Pakistan inning, which was converted well by fifties from Babar Azam, Mohammad Hafeez and Pak captain Sarfaraz Ahmed.

England did not start well in their chase as they first lost Jason Roy, where he got out by a leg before by Shadab Khan and later Jonny Bairstow fall prey to Wahab Riaz in the 9th over.  Joe Root was dropped early in his inning by Babar Azam, Pakistan fans will hope that it doesn't prove costly.

(The above story first appeared on LatestLY on Jun 03, 2019 08:42 PM IST. For more news and updates on politics, world, sports, entertainment and lifestyle, log on to our website latestly.com).