‘We Stand Against Racism’: England Cricket Board Shares Beautiful Message About Unity in Diversity 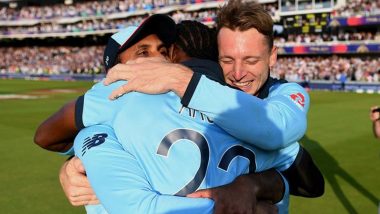 Racism is certainly one of the many problems which many cricketers have faced over the years. There are several instances when players had to face derogatory comments on the basis of their caste, religion and race. However, the England Cricket Board (ECB) made it crystal clear that they are completely against racism and they believe in unity in diversity. The apex cricket body took to their official Twitter account and shared a picture from ICC Cricket World Cup 2019 where Jos Buttler, Jofra Archer and Adil Rashid can be seen hugging each other. “We stand for diversity, We stand against racism,” read the caption of the snap. . Jofra Archer Claims Getting Racially Abused by a Spectator.

The current England team consists of many players from different parts of the world like Ben Stokes was born in New Zealand and Adil Rashid hails from Pakistan. In fact, England’s limited-overs captain Eoin Morgan is also from Ireland. Nevertheless, all these guys play as a strong unit on the field and England’s recent success is the proof of the fact. Meanwhile, let’s have a look at England’s latest post.

We stand for diversity,

We stand against racism. pic.twitter.com/onhWj07n2i

England rising pace sensation Jofra Archer, who is from Barbados, was also subjected to racism abuse by a spectator during the 1st Test of England’s 2019 Tour of New Zealand at Mount Manganui. The case was investigated and the guilty fan was handed a two-year ban from attending any domestic or international match in the country for two years.

Meanwhile, many England cricketers have been allowed to train outdoors following the relaxations in COVID-19 lockdown restriction. The team is all also planning to host West Indies for a three-match Test series in July. Well, if the tour goes as per plan the series will be the first international cricket assignment after the outbreak of the pandemic.

(The above story first appeared on LatestLY on Jun 02, 2020 08:37 AM IST. For more news and updates on politics, world, sports, entertainment and lifestyle, log on to our website latestly.com).