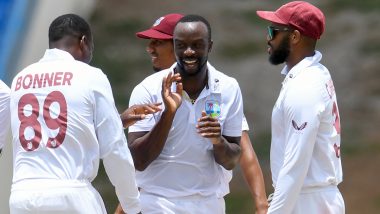 West Indies will be looking to wrap up the test series against Bangladesh when the two teams meet in the second and final Test at the Darren Sammy National Cricket Stadium in Gros Islet. The Bangla Tigers downed too easily in the previous game as they folded for 103 in the first innings of the first Test. From then onwards, the team only played catch-up to the West Indies. The problem with the Bangladesh batting is not new but the concern has been the non-reversal of this negative trend. West Indies on the other hand will be confident on striking more blows on the already struggling Asian side. WI vs BAN Dream11 Team Prediction: Tips To Pick Best Fantasy Playing XI for West Indies vs Bangladesh 2nd Test 2022 in Saint Lucia.

Jayden Sales, Kemar Roach, Alzarri Joseph and Kyle Mayers all picked up wickets for West Indies in the last match and more than the wickets, it was the pressure they created which was praiseworthy. Kraigg Brathwaite was unlucky to miss out on a century and he will be looking forward to be amongst the run once again. Another win for the hosts and their prospects in the World Test Championship will be looking good.

The problems in the Bangladeshi batting run deep and as many as six players fail to open their account in the first test fiasco. Skipper Shakib Al Hasan was the only player that looked like playing at the level required and this is a cause of immense worry for their fans. Khaled Ahmed and Mehidy Hasan did provide some positivity in term of bowling but the team needs to clearly improve on several front.

Which TV Channel Will Provide Live Telecast of WI vs BAN 2nd Test 2022?

Sadly there is no official broadcaster of Bangladesh tour of West Indies 2022 in India. However, in absence of WI vs BAN live TV telecast, live streaming online option is available for fans.

How to Watch Live Streaming Online of WI vs BAN 2nd Test 2022?

Despite not live telecast available, fans in India can watch WI vs BAN live streaming online on FanCode mobile app and website. Users will have to pay a nominal fee to get access to live content. West Indies will win the second game with ease and Bangladesh could well lose their third test series on the bounce.

(The above story first appeared on LatestLY on Jun 24, 2022 05:06 PM IST. For more news and updates on politics, world, sports, entertainment and lifestyle, log on to our website latestly.com).