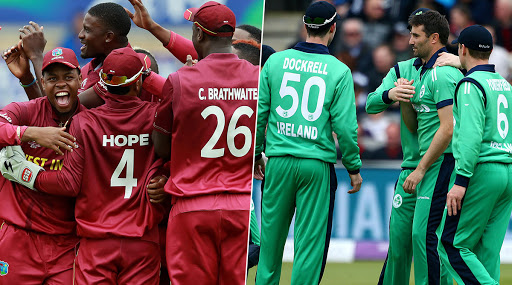 After a mixed bag of results in the ODI series against India under the leadership of Kieron Pollard, the Caribbean side will be looking to start their New Year on the front foot as they host Ireland for a three-match One-Day series. Ireland will be looking to make a fresh start under new captain Andy Balbirnie. West Indies showed that there were up for a fight as they pushed India hard in the limited-overs format while recording some impressive wins on the series. Meanwhile, fans searching for live streaming and live telecast details of West Indies vs Ireland 1st ODI 2020 can scroll down below for more details. West Indies vs Ireland Dream11 Team Prediction.

Before the tour of India, West Indies defeated Afghanistan 3-0 their first series win in five years. This will be Ireland’s first match since finishing third in the ICC Men’s T20 World Cup Qualifier in Dubai and will be hoping for a positive start under a resurgent opposition. During their last encounter, Ireland posted a mammoth total of 327/5 thanks to Balbernie’s 135 but West Indies chased down the target easily with five wickets to spare courtesy a century from Sunil Ambris. West Indies Vs Ireland, Cricket Score 1st ODI Match.

The 1st One Day International match between West Indies and Ireland will be played at the Kensington Oval stadium in Bridgetown on January 7, 2020 (Tuesday). The match is scheduled to start at 11:00 pm IST (Indian Standard Time) and 01:30 pm local time.

How to Watch Live Telecast of West Indies vs Ireland, 1st ODI 2020 in India (TV Channel and Broadcast Details)

The live telecast of West Indies vs Ireland match is said to be telecasted on Sony Sports Network in India though there is no official confirmation over it. Fans from India can tune into Sony Six and Sony Six HD to enjoy the action. Sports Max and ESPN will telecast the game in the Caribbean regions.

Where to Get Free Live Streaming Online of West Indies vs Ireland, 1st ODI 2020?

SonyLiv will are expected to stream the matches live for its fans in India. Audience from the Caribbean can tune into the digital platform of Sports Max, ESPN and Flow Sports to enjoy the WI vs IRE action. The official YouTube channel of West Indies cricket will also stream the live action of this match.

The second match will be played on January 9 while the final ODI will take place on January 12 2020. After the conclusion of this series, the teams are set to lock horns in a three-match T20I series. Both teams will be hoping to start the New Year on a positive note and with a morale-boosting win.