A fan decoded Wasim Jaffer's coded message for Virat Kohli to pick the Indian playing XI for the third and final ODI match against England. Jaffer shared a picture with a coded message on Twitter and told Kohli that it was a suggestion from him to pick the next playing XI. A Fan then successfully decoded the message. 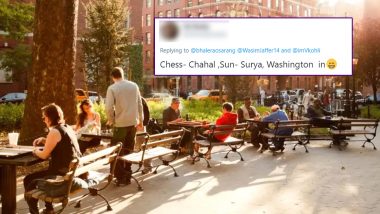 Wasim Jaffer is back with his coded suggestion for Indian captain Virat Kohli. The former India cricketer had few suggestions for Kohli to help him decide India’s next playing XI for the third and final ODI match against England. Jaffer continued his tradition of sharing a picture with coded words in it and offered Kohli a suggestion to pick the next playing XI. Fans once again started decoding Jaffer’s message for Kohli. One fan may have successfully decoded Jaffer’s message. India are to play England in the 3rd and final ODI match of the series on March 28 (Sunday). This Day That Year: Virat Kohli Plays a Majestic Knock Against Australia in T20 World Cup 2016 (Watch Video).

“Good morning @imVkohli a photo to brighten up your morning. And yes, good luck for the game tomorrow, Jaffer wrote in a tweet. The post was accompanied by a wonderful picture in which people can be seen sitting on a lawn and playing a game of chess. The following words were written on the image: “Chess players can be seen in the late afternoon sun in Washington Square Park in Greenwich Village, Manhattan, N.Y.” Take a look at Jaffer’s post. India vs Pakistan T20I Series: BCCI Vice-President Rajiv Shukla Denies Reports About Bilateral Series.

Good morning @imVkohli a photo to brighten up your morning. And yes, good luck for the game tomorrow😉 #INDvsENG #decode pic.twitter.com/Vyfl7f24u1

Those words were a coded message for Kohli ahead of the third ODI against England on Sunday. Fans tried to decode the message. One fan broke down the words and said that 'Chess' referred to Yuzvendra Chahal, 'Sun' referred to Suryakumar Yadav and 'Washington' was referring to Washington Sundar. Chahal was a national-level chess player before he shifted to cricket. Take a look at the fan’s reply.

India, meanwhile, will look to return to winning ways after being beaten by six wickets in the second ODI match against England. The three-match ODI series is currently tied 1-1 with India winning the series opener by 66 runs and England levelling the series with a victory in the second match.

(The above story first appeared on LatestLY on Mar 27, 2021 12:14 PM IST. For more news and updates on politics, world, sports, entertainment and lifestyle, log on to our website latestly.com).