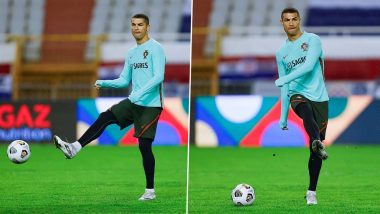 Cristiano Ronaldo had been rested in Serie A 2020-21 game against Benevento. However, the five-time Ballon d'Or winner was seen sweating it out in training session ahead of their Champions League 2020-21 game against Dynamo Kyiv. Joining him at the training session were Giorgio Chiellini and Merih Demiral. Which means it is very likely that the Portugal star could make a comeback in the playing XI of the UCL 2020-21 tie. So the training session brought in good news for Juventus fans. CR7 has been in a terrific form since the start of 2020 and has been a vital member of the Bianconeri. Cristiano Ronaldo Beats Lionel Messi, Robert Lewandowski, Arturo Vidal & Others to Win Golden Foot Award 2020.

Gigi Buffon could also make a comeback into the starting XI of the match. On the other hand, Dynamo Kyiv will have to step into the game without the services of a host of their players including Nazariy Rusyn, Oleksandr Tymchyk, Volodymyr Kostevych and Mykyta Burda. Now, let's have a look at the pictures of the training session by Juventus.

Juventus could line-up with 4-4-2 formation. Check out likely starting XI for Bianconeri.

The opponents could step into the game with 4-4-1-1 formation.

The match will begin at 1.30 am IST and surely the team would want to keep up with their winning spree in the Champions League 2020-21. Ronaldo would surely be the player to watch out for.

(The above story first appeared on LatestLY on Dec 02, 2020 02:37 PM IST. For more news and updates on politics, world, sports, entertainment and lifestyle, log on to our website latestly.com).