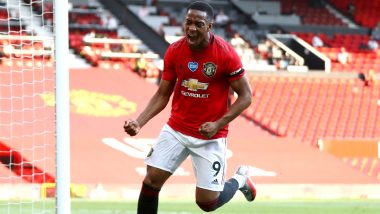 Manchester United fans are dreaming once again as the new breed of attacking talent are finally living up to the expectations. On Wednesday (June 24, 2020), Ole Gunnar Solskjaer’s men put on an excellent team display against Sheffield United as they won 3-0 with Anthony Martial hogging the headlines by netting a brilliant hat-trick. This win puts United within two points of fourth-placed Chelsea. Alexis Sanchez to Return to Manchester United Once Loan Deal With Inter Milan Expires on June 30.

The days of Cristiano Ronaldo, Wayne Rooney and Dimitar Berbatov, scoring goals for fun are long gone but the likes of Marcus Rashford, Anthony Martial and Bruno Fernandes are bringing a similar kind of feeling back to Old Trafford. Against Sheffield, Martial netted his first-career hat-trick which put an end to a disastrous run for the record English champions in the Premier League. Liverpool 4–0 Crystal Palace, Premier League 2019–20 Match Result: Mo Salah, Sadio Mane on Target As Jurgen Klopp’s Men Inch Closer to First EPL Title.

Before tonight, Anthony Martial had never scored a hat-trick in senior football...

He forgot he was supposed to take the match ball 😂

The Frenchman opened the scoring the seventh minute of the game as he liked up with Marcus Rashford to give United the lead and then just before half-time got on the end of an Aaron Wan-Bissaka cross to double the home side’s advantage.

Red Devils dominated the game and in the closing minutes of the game, Martial and Rashford once again combined to complete the Frenchman’s first career hat-trick. This was also the first treble by a Manchester United player in the Premier League post the retirement of former manager sir Alex Ferguson.

The last United player to net three goals in one EPL game was Robin Van Persie when the Dutchman scored a brilliant hat-trick against Aston Villa in April 2013, which guided Manchester United to their record 20th domestic league title.

‘I feel very good, it’s the first hat-trick in my career, I’m happy because the team played very good today. (Marcus Rashford) gave me one or two assists today, so the most important thing is to win. I tried to give him a chance to score, no competition, we just want to win.’ said Martial after the game.

Manchester United are now unbeaten in 13 games in all competitions and will need to keep that run going if they are to tip Chelsea for the fourth Champions League spot. Frank Lampard’s men will play departing champions Manchester City in their latest fixture.

(The above story first appeared on LatestLY on Jun 25, 2020 10:52 AM IST. For more news and updates on politics, world, sports, entertainment and lifestyle, log on to our website latestly.com).