Antonio Conte Slams Tottenham Hotspur After Their Defeat to Mura in UEFA Europa Conference League, Says, ‘At This Moment the Level Is Not So High’

Tottenham's put up a poor performance as they lost 1-2 to Slovenian outfit Mura in the UEFA Europa Conference League. Antonio Conte was not a happy man post that loss and reflected on the defeat. 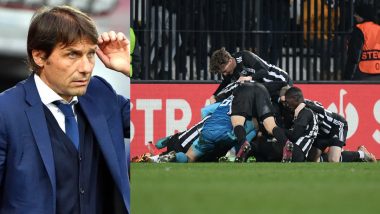 Tottenham's struggling season just hit a new low as they suffered a shocking 1-2 defeat to Slovenian club Mura in the UEFA Europa Conference League. And head coach Antonio Conte did not offer to make any excuse post the defeat and said it will take some time to, "to bring Tottenham back." Spurs sacked Nuno Espirito Santo earlier this month following some poor performances by the side and they have now fallen to their first defeat in the Conte era to an unexpected opposition. Harry Kane had cancelled out Tomi Horvat's goal but Tottenham conceded in the stoppage time when Amadej Marosa scored the winner to inflict an embarrassing loss on the London club. Mura Embarrasses Tottenham by Sealing 2-1 Win in UEFA Europa Conference League 2021-22 Match

"This a bad loss for us. The performance was poor. We know we have a lot of work ahead of us. This is a difficult moment for us. We need patience to improve, to be good again. We were poor not only technically and tactically but also mentally. It will take time to bring Tottenham back. After three weeks I am starting to understand the situation. It is not simple. At this moment the level at Tottenham is not so high," a disappointed Conte said at the end of the match.

Having played with big names like Dele Alli, Harry Kane and also Tanguy Ndombele, Conte's men conceded early and then to make matters worse, Ryan Sessegnon was shown a red card for a foul--all of this happening in the first half. Kane found a way to bring his side back into the contest in the 72nd minute but a late goal ensured that they walked out of Slovenia empty-handed.

Now, Conte's side face a must-win situation against Rennes if they aim to make it to the knockouts.

(The above story first appeared on LatestLY on Nov 26, 2021 07:53 PM IST. For more news and updates on politics, world, sports, entertainment and lifestyle, log on to our website latestly.com).