Argentina FIFA World Cup 2022 Round of 16 Qualification Scenario: Here’s How Lionel Messi and Co. Can Make It To Last 16 After Defeat to Saudi Arabia

The former champions were left stunned by a spirited Saudi Arabia side as the latter came back from a goal down to clinch all three points on offer. Despite the defeat, Argentina still have a chance to qualify for the knockout stages. Continue reading to find out how. 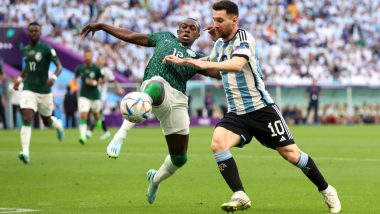 Argentina were in for an unimaginable and unexpected start to their FIFA World Cup 2022 when a spirited Saudi Arabia side beat Lionel Messi and co. Argentina did have the lead in this game when Messi netted the opener in the 10th minute with a strike from the penalty spot. But Saudi Arabia came out fighting in the second half of the contest and two quick goals from Saleh Alshehri and Salem Aldawsari in the 48th and 53rd minutes turned the contest upside down. Though the two-time champions tried hard for an equalizer, it was not to be as Saudi Arabia held on to their lead to pull off a famous win. Argentina vs Saudi Arabia Video Highlights, FIFA World Cup 2022: Lionel Messi and Co Left Stunned in Group C Opener

With this defeat, Argentina’s path to the FIFA World Cup 2022 last 16 becomes more complicated. The Messi-led side have been tipped to be favourites to win the title in Qatar alongside other heavyweights like Brazil, Portugal, Spain and Germany among others. This shocking defeat at the hands of a side whom they were expected to win against, leaves them

at the bottom of Group C standings with a negative goal difference (-1). Read on to find out how Argentina can still make it to the last 16 of the competition.

How Can Argentina Still Qualify for FIFA World Cup 2022 Round of 16 After Saudi Arabia Defeat?

Despite a defeat in their campaign opener against Saudi Arabia, Argentina can still enter the last 16 of the FIFA World Cup. For them to qualify for the next stage, Messi’s side have to win both their remaining games in the group. Argentina’s next challenge is in the form of Mexico, who they play on November 27. Their final Group C match will be against Poland on December 1. Both these matches would be difficult ones for La Albiceleste as these sides have some quality players. Argentina’s best chance to qualify is to win both these games, preferably by big margins.  Saudi Arabia Fans Do Cristiano Ronaldo’s 'Siuuu' Celebration After Beating Lionel Messi’s Argentina in FIFA World Cup Qatar 2022 (Watch Video)

If Argentina end up losing either one of these two remaining matches, that is when things would be getting even more complicated for the former champions. With one win out of two matches, and with a good goal difference, they would then need to have other results go their way. Argentina will hope that they qualify with a good goal difference in case they are stuck on the same points as other sides.

(The above story first appeared on LatestLY on Nov 22, 2022 10:55 PM IST. For more news and updates on politics, world, sports, entertainment and lifestyle, log on to our website latestly.com).