Amrinder Singh had earlier represented ATK in ISL 2015 and this would be his second stint with the Kolkata club under coach Antonio Lopez Habas after a trophy laden 2020-21 season. 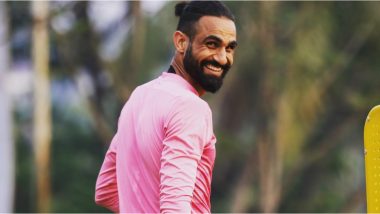 Reunions are in the air right now and they always worth celebrating. Take the Friends reunion as an example. And ATK Mohun Bagan took a cue from that to express their emotions after they signed goalkeeper Amrinder Singh from Indian Super League champions Mumbai City, on Monday. Singh had earlier represented ATK in the ISL in 2015 and this would be his second stint with the Kolkata club under coach Antonio Lopez Habas after a trophy laden 2020-21 season. ATK Mohun Bagan took to Instagram to express their thoughts on this new signing. Sports News | ISL: ATK Mohun Bagan Announce Signing of Goalkeeper Amrinder Singh

After signing for the former ISL champions, Singh said that he would be looking forward to replicating his success for Habas' men. I want the same success in the green and maroon jersey next season,” he stated.

He further added, “There are three reasons behind coming to Kolkata. They are a huge number of ATKMB supporters, the football philosophy of coach Habas and the principal owner of the team Sanjiv Goenka and the glorious history of football of this City.”

(The above story first appeared on LatestLY on Jun 02, 2021 03:08 PM IST. For more news and updates on politics, world, sports, entertainment and lifestyle, log on to our website latestly.com).