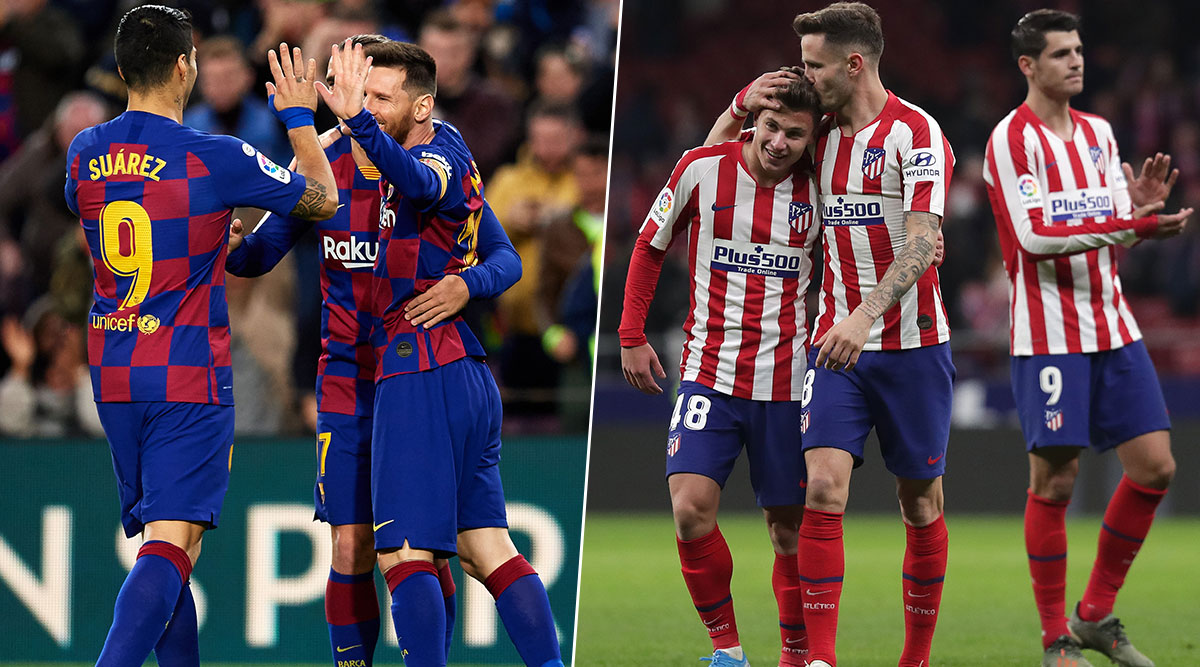 Defending champions FC Barcelona will start their Supercopa De Espana title defence when they meet Atletico Madrid in the Spanish Super Cup semi-final on January 10, 2020 (Friday) as per Indian time. Barcelona, also the reigning La Liga champions and the most successful team in the competition, beat Sevilla 2-1 to win the Spanish Super Cup last season and will hope to repeat the same against Atletico Madrid. Fans, who play fantasy games like Dream11, can find all tips and team suggestions with player from and availability to help them build a strong and balanced Dream11 fantasy team for the FC Barcelona vs Atletico Madrid semi-final clash in 2020 Supercopa de Espana. Valencia vs Real Madrid Goal Video Highlights: Toni Kroos, Isco & Luka Modric Power Los Blancos to Supercopa De Espana 2020 Final.

Lionel Messi was the difference when both these met earlier this season in the Spanish domestic League. The Argentine’s magic 4-minutes from regulation time propelling a lacklustre Barcelona to a 1-0 victory over Diego Simeone’s Atleti. The Madrid side, however, are unbeaten since then in five matches – four of which they have won. Barcelona in the same period have played six, won three and drawn three. Ernesto Valverde’s team are unbeaten in their last 12 matches.

FC Barcelona vs Atletico Madrid, La Liga 2019-20, Dream11 Team Prediction: Goalkeeper – Marc Ander-ter-Stegen (BAR) is out with a knee problem and hence Jan Oblak (ATL) should be picked as the goalkeeper for this team.

FC Barcelona vs Atletico Madrid, La Liga 2019-20, Dream11 Team Prediction: Defenders – Both teams have carried few youngsters from their ‘B’ team for the Spanish Super Cup in Saudi Arabia. Gerard Pique (BAR), Jordi Alba (BAR) and Kieran Trippier (ATL) should be picked as the defenders.

FC Barcelona vs Atletico Madrid, La Liga 2019-20, Dream11 Team Prediction: Forwards – Antoine Griezmann (ATL) will face his former side and expect him to rise to the occasion. Lionel Messi (BAR) is a must and Alvaro Morata (ATL) can play as the target man for this team.

Atletico Madrid will aim for their third Supercopa De Espana title and first since 2014. They have finished runner-up five times in the competition. Interestingly, they have lost to Barcelona in the Spanish Super cup final all five times they ended as runner-up. Their only win against the Blaugrana came in 1985 – the first time they won the tournament.