Barcelona will take on Rayo Vallecano in their opening game of La Liga 2022-23 tonight at Spotify Camp Nou. For live streaming details of the match scroll down below. 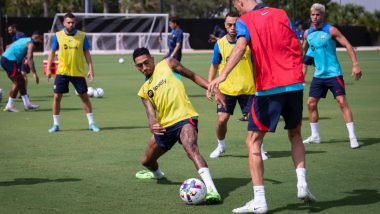 Barcelona will start their La Liga 2022-23 Campaign tonight, August 14 against Rayo Vallecano at Spotify Camp Nou. The Catalan Club are currently flying high after a successful pre-season tour in USA which saw them beat their archrivals Real Madrid. The Spanish giants would look to making a statement in the season opener. After finishing second in the La Liga standings last season, Barca have made big signings like Robert Lewandowski, Raphinh, Jules Kounde and a few more to create a strong squad which will fight for all the major trophies this season. On the other hand, Rayo Vallecano, who finished 12th in the 2021-22 La Liga season, would look for at least a top-10 finish this season. Barcelona Fail to Register Jules Kounde After Including Four New Signings in the Club Squad

After taking charge of Barcelona, Xavi Hernandez has been busy in the summer transfer market. Lewandowski, Kounde, Raphinha, Franck Kessie and Andreas Christensen have arrived to strengthen the squad. However, the Spanish club has been unable to register Kounde till now and the player wouldn't be able to play for them. Lewandowski and Raphinha are expected to start alongside Ousmane Dembele. Gavi, Pedri would feature in the playing XI for the Catalan outfit as they displayed great performance in their last match. Christensen, Jordi Alba, Sergio Busquets, Kessie and Ferran Torres could start from the beginning.

For Rayo Vallecano, they would go for same line up which played against Valladolid in the last game of their pre-season campaign. Radamel Falcao, Fran Garcia, Diego Lopez, Oscar Trejo and Unai Lopez are expected to feature in the playing XI for Andoni Iraola's side. Pathe Siss and Oscar Valentin also could get some minutes in the match. Scroll down below to get the live telecast and online live streaming of the match.

Where to Get Live Telecast of Barcelona vs Rayo Vallecano, La Liga 2022-23 Football Match?

Fans in India can watch the Barcelona vs Rayo Vallecano match live on Sports18 TV channel in India.

How to Get Free Live Streaming of Barcelona vs Rayo Vallecano, La Liga 2022-23 Football Match?

Indian fans can get the online live streaming of the La Liga match on Voot app and website.

(The above story first appeared on LatestLY on Aug 13, 2022 09:09 PM IST. For more news and updates on politics, world, sports, entertainment and lifestyle, log on to our website latestly.com).