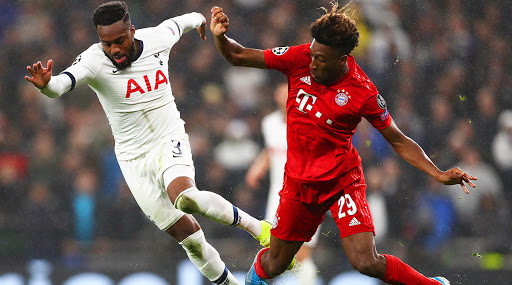 Bayern Munich vs Tottenham Hotspur, UEFA Champions League Live Streaming Online: Jose Mourinho will be looking for his first major scalp as a Tottenham Hotspur manager when his side faces Bayern Munich in the UEFA Champions League. Both sides have made it to the next stage but the Londoners will have revenge on their minds when they face the German champions. Bayern humiliated Tottenham Hotspur 7-2 in the reverse fixture and such has been the enormity of that defeat that there are reports Mourinho has banned his players from watching the highlights of that game. Fans searching for live streaming of Bayern vs Spurs in UCL 2019-20 can scroll down below for more details. Ansu Fati Becomes Youngest Goal-Scorer in Champions League History During Inter Milan vs Barcelona Clash.

Bayern Munich have lost their last two games in the Bundesliga which is a cause for worry for temporary manager Hans-Dieter Flick. Corentin Tolisso and Jerome Boateng have been decalred fit to face Spurs after suffering injuries in the last game. Robert Lewandowski is one of Europe’s most prolific scorer and will be a threat in the forward areas. Phillipe Coutinho and Serge Gnabry will play just behind Lewandowski and try and exploit the spaces afforded to them. Benjamin Pavard at the back will need the support of the rest of the pack to keep things tight at the back. UEFA Champions League 2019–20 Result: Jadon Sancho, Marco Reus Goals Help Dortmund Beat Slavia Praha 2–1 and Secure Last 16 Berth.

Harry Kane is not part of the squad that faces Bayern Munich as he has been given a day off by Jose Mourinho. Tanguy Ndombele and Ben Davies have been ruled out of the game due to ankle injury respectively while Ben Davies will undergo a late fitness test to determine his availability for the match. Heung Min-Son and Dele Alli have improved massively under the new management and their play especially on the counter has been world-class. Defence is still an area of concern and the likes of Jan Vertonghen and Toby Alderweireld must improve. Mohamed Salah Scores From Tight Angle Against RB Salzburg in UEFA Champions League 2019–20, Twitterati Hail Egyptians Strike (Watch Video).

Bayern Munich vs Tottenham Hotspur Group B match in the 2019-20 Champions League will be played on December 12, 2019 (Thursday) and will take place at the Allianz Arena in Munich. BAY vs TOT Group B UCL encounter is scheduled to start at 01:30 am IST (Indian Standard Time).

You can also follow the Bayern Munich vs Tottenham Hotspur match on online platforms. Sonyliv, which is the official online media streaming platform of Sony Network, will be live streaming BAY vs TOT Group B encounter of 2019-20 UEFA Champions League matches for its online fans in India. Fans can also follow LatestLY for the live-score updates of Bayern Munich vs Tottenham Hotspur and other UEFA 2019-20 Champions League matches.

Bayern Munich are low on confidence at the moment and it will not be a surprise if they their pockets picked by Jose Mourinho and his counter-attacking masterclass in the Champions League.