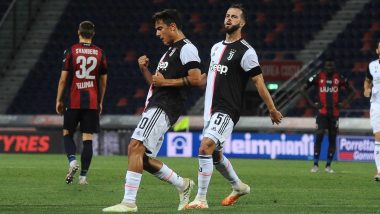 Things were back to normal in Serie A for Juventus as they emerged as 2-0 winners away to Bologna in their first game of the league restart. With this win, Maurizio Sarri’s men have put some daylight between them and Lazio in second place, but the Ciro Immobile-spearheaded side still have their game in hand. Cristiano Ronaldo and Paulo Dybala were on target to give the Bianconeri’s their win. Italian Champions Agree Player-Swap Deal With Barcelona Involving Miralem Pjanic and Arthur Melo.

After the unexpected Coppa Italia loss against Napoli, a few days earlier, Juventus needed to start on the right foot when Serie A resumed and they have done just that. A lot was being said about Cristiano Ronaldo’s form ahead of the game but the Portuguese star once again got himself on the score sheet as he converted the penalty in the 23rd minute to break the deadlock. Inter Milan 2–1 Sampdoria, Serie A 2019–20 Match Result: Romelu Lukaku, Lautaro Martinez on Target as Antonio Conte’s Men Secure Comfortable Win.

Juventus looked good as they continued to dominate possession and also test Skorupski in the opposition goal. After conceding early on, Mihajlovic’s men would have liked the scores to same until half-time but it wasn’t meant to be as a wonder strike from Paulo Dybala in the 36th minute saw them go 2-0 behind in the game.

This goal was enough to give Sarri’s men the much-needed win after a difficult week. The only thing which didn’t go Juventus’ way on the night was the sending off of Brazilain full-back Danilo in injury time for two yellow cards. This means he will miss the clash against Lecce in three days time.

(The above story first appeared on LatestLY on Jun 23, 2020 08:42 AM IST. For more news and updates on politics, world, sports, entertainment and lifestyle, log on to our website latestly.com).