The Italian coach, who reached his fifth Champions League final, shared that he showed a video which had all of Real Madrid's comebacks this season, before the game. Manchester City were in touching distance of the final but three late goals helped Real Madrid get there instead. 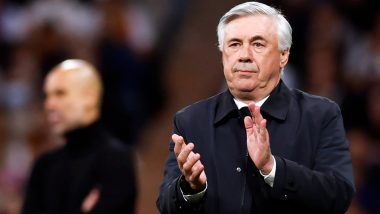 Real Madrid pulled off one of the most memorable comebacks in the UEFA Champions League 2021-22 as they defeated Manchester City 6-5 on aggregate to enter the final of the premier European competition. The Los Blancos were down and out, losing the game 1-0 in the 89th minute but a Rodrygo Goes brace and a Karim Benzema penalty saw them win the match 3-1 and take the tie 6-5. Head coach Carlo Ancelotti has now revealed that he showed the team a motivational video of their comebacks in the whole season. Karim Benzema Has Equaled Cristiano Ronaldo for Most Goals Scored in Knockout Stage of Single Champions League Season

"The video I showed the team before we took to the pitch was of all the comebacks we have already made this season – which is eight in total. The video ended with the message: 'There is one missing'. And we succeeded," Ancelotti said, as quoted by Movistar. “The greatness of this club is that it never lets you down. When all seems lost, it gives you the strength to continue, to fight, to believe.

“We had a good match against a great team. We called on our reserves to equalise and win. Reaching the final is already a success. Now we're very close to winning it," the Italian added further.

It has to be kept in mind that Real Madrid have made some sensational comebacks this season, one of them being against PSG when Benzema's hattrick blew the Parisians out of the competition in the last-16 stage. Real Madrid now are on the brink of winning a 14th Champions League title but it surely would not be easy against Liverpool, who would have some old scores to settle with the Spanish club, having lost to them in the 2018 UCL final. Ancelotti also entered this fifth Champions League final, the most by a coach.

(The above story first appeared on LatestLY on May 05, 2022 05:29 PM IST. For more news and updates on politics, world, sports, entertainment and lifestyle, log on to our website latestly.com).