Defending champions Chelsea played out a 3-3 draw with Zenit Saint Petersburg in Russia while Juventus beat Malmo 1-0 in Turin in other matches in this round. Juventus finished in first place in the group with Chelsea second. 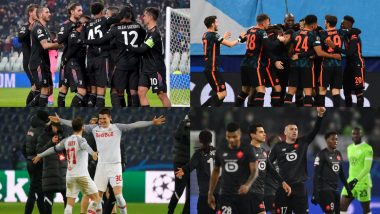 Paris, Dec 9: French side Lille made it to the last-16 stage of the UEFA Champions League along with Austria's FC Salzburg with victories against Wolfsburg and Sevilla respectively.

That left one more place in the knockout rounds to be filled as the match between Spanish side Villarreal and Italian club Atalanta was postponed for Thursday night because of heavy snow in the Italian city. Villarreal need to win the match to finish second behind Manchester United, who topped the group following a 1-1 draw with Swiss side BSC Young Boys at Old Trafford. Barcelona Out of Champions League After 3–0 Defeat to Bayern Munich, Miss Knockouts for First Time in 20 Years.

Ralf Rangnick was held on his UEFA Champions League bow for Manchester United as a much-changed side were pegged back by Young Boys. Mason Greenwood opened the scoring with a stunning acrobatic volley, but Fabian Rieder curled into the top corner before the interval. Young Boys had the better chances thereafter, but there was no way through.

Defending champions Chelsea played out a 3-3 draw with Zenit Saint Petersburg in Russia while Juventus beat Malmo 1-0 in Turin in other matches in this round. Juventus finished in first place in the group with Chelsea second.

The focus was on LOSC Lille's match with Wolfsburg and the French side secured its place in the last 16 after a convincing 3-1 win in Germany. Burak Yilmaz opened the scoring in the first half before two quick-fire goals from Jonathan David and Angel Gomes in the final 20 minutes booked the French side's ticket to the next round. The hosts finished fourth.

Salzburg clinched the second spot in Group G courtesy of Noah Okafor's strike just after the interval. It was Sevilla who looked likeliest to break the deadlock for much of the game, Munir going closest when he headed against the crossbar. However, Okafor coolly swept in Karim Adeyemi's cross two minutes later, and Sevilla then had Joan Jordán dismissed after the hour mark as Salzburg went on to win 1-0.

Magomed Ozdoev's splendid 94th-minute strike ensured an end-to-end contest with Zenit ended all square to deny Chelsea top spot in Group H. Timo Werner's opener came after 82 seconds, surpassing John Terry's 86-second effort against Schalke in November 2014 as Chelsea's fastest UEFA Champions League goal. But the Russian scored through Claudinho and Azmoun to take lead. And Werner looked to have wrapped up the win with his second of the game in Russia, the German having also chalked up an assist for Romelu Lukaku as the Blues recovered from 2-1 down to lead 3-2. But Zenit made their point with Ozdoev securing the 3-3 draw.

In Turin, Moise Kean's first UEFA Champions League goal for the club secured victory and a top spot for Juve against Malmo. Kean headed in the winner on 18 minutes, but it was Federico Bernardeschi's delightful cross with the outside of his boot that was the real standout moment of quality in a tight game.

(The above story first appeared on LatestLY on Dec 09, 2021 10:57 AM IST. For more news and updates on politics, world, sports, entertainment and lifestyle, log on to our website latestly.com).