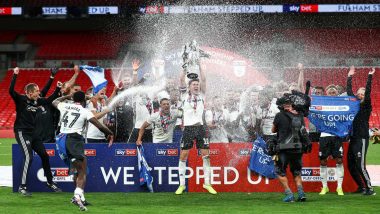 The richest game in football proved to be heart-breaking for the Brentford fans as a defeat means that their 73-year wait to play in England’s top tier goes on. But it was jubilation on the other end as Fulham, under a young enigmatic manager, once again had their Wembley moment as The Cottagers will feel they are back where they belong. Brentford to Earn Over $200 Million if Promoted to Premier League.

It was not an eye-catching finale by any means but Scott Parker’s team got the job in the most dramatic fashion. After being inseparable for more than 100 minutes in the game, Joe Bryan came up with a moment of brilliance as he caught David Raya off-guard in the Brentford goal with an inventive free-kick.

🙌 What a time for Fulham left-back @joebryan to double his goal tally for the club!

🏆🤑 This extra-time brace in the @SkyBet Championship play-off final sent the Cottagers back to the Premier League!#FFC @FulhamFC pic.twitter.com/9qZmP9WPmw

In the closing minutes, Bryan confirmed Fulham’s win as he got on the end of a wonderful team move to double their lead. Henrik Dalsgaard pulled one back in the final moments of the game but it proved to be too little in the end.

THE PERFECT END TO A WILD SEASON! 🏆 #FULFORCEpic.twitter.com/VcIsxJOt9Y

Fulham will receive £135 million after winning football's richest game. This will give them an opportunity to make further additions to their team as they gear up for Premier League football next season. Manager Scott Parker has said that a squad overhaul is highly unlikely.

Fulham just spent one year in the second division as they returned to England’s top flight in the first time of asking. However, Scott Parker will now be hoping that his side could fare better in the Premier League next season and stay there for a longer period than the last time they were promoted.

(The above story first appeared on LatestLY on Aug 05, 2020 10:51 AM IST. For more news and updates on politics, world, sports, entertainment and lifestyle, log on to our website latestly.com).