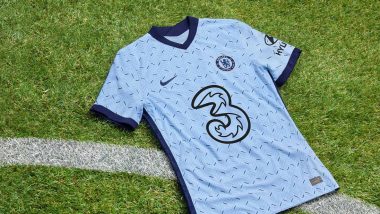 Chelsea have revealed their new away kit for the 2020-21 campaign but will don it for the first time against Crystal Palace on July 7, 2020 (Tuesday). The Blues have already released their home jersey for the upcoming season and wore it during the games against West Ham and Watford. The shirt is predominantly Sky Blue in colour and has received mixed reactions from the fans with many comparing it to Manchester City. Bayern Munich Unveil New Home Kit for 2020–21 Season, Fans Unimpressed With Mundane Jersey Design (See Pics).

‘Introducing our new @nikefootball 20/21 away kit. Inspired by a classic tailored aesthetic but filtered through a modern street lens and colour palette.’ The Premier League side captioned their post while unveiling the new kit. The jersey will be available for purchase from July 30, 2020, onwards. Bizarre Real Madrid 2020–21 Kit With Pink Stripes Leaked Online, Fans Disappointed With New Jersey Design (See Pics).

Introducing our new @nikefootball 20/21 away kit. Inspired by a classic tailored aesthetic but filtered through a modern street lens and colour palette.

Similar to the home kit, the away jersey will also sport the logo of new shirt sponsor ‘Three UK’ in the front. Frank Lampard’s men will wear the jersey for the fort time in tonight’s game but on the first viewing, it has drawn mixed reactions from the Blues faithful who are comparing it's colour to that of Manchester City. Here are some of the reactions.

We Want to be Man City

We want to b Mancity so bad

Trying to be Manchester City

Are you trying to be Manchester City?

We Are Not Manchester City

We're not Man City! Since when does Chelsea wear baby blue?

Speaking of Chelsea, the Blues are involved in a gruelling four-team race to qualify for next season’s UEFA Champions League. Frank Lampard’s men are currently fourth in the points table and with Manchester United and Wolves on their back, they need to keep on winning any avoid slip-ups to secure European qualification.

Chelsea have lost just once in their five-game since the restart, which also includes a victory over departing champions Manchester City. They will take on the Eagles tonight at Selhurst Park, who are on a three-game losing streak.

(The above story first appeared on LatestLY on Jul 07, 2020 02:15 PM IST. For more news and updates on politics, world, sports, entertainment and lifestyle, log on to our website latestly.com).