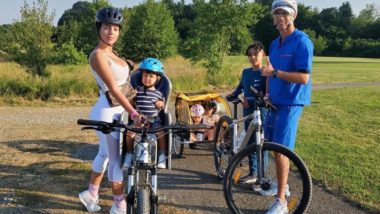 Cristiano Ronaldo is having a time of his life not only on the field, but also off the field. The five-time Ballon d’Or winner has already created ripples with his return to Turin and the official page of the Juventus keeps sharing pictures and videos of CR7 sweating it out in the nets. Now, CR7 was spotted bike riding along with Georgina Rodriguez and four kids. The family looked elated as they posed for a picture on social media. The happy picture was posted on social media by Cristiano Ronaldo. Cristiano Ronaldo Pulls Off Sensational Trick Shot During Juventus Training (Watch Video).

In the picture, we see Ronaldo was seen donning electric blue sports ensemble which went well with a white pair of Nike. Ronaldo hid his man bun under the safety helmet he wore while riding the bike. While posing for the picture Ronaldo gave a cheeky thumbs up. The Juventus star uploaded the snap with a simple caption which read, “Family Bike Ride [cycling emoji and red heart emoji].” Now check out the snap shared by Ronaldo below:

Talking about Ronaldo he came to Turin in the first week of May. He was earlier in Madeira to see his ailing mother who ha suffered from heatstroke. CR7 was stuck in Maderia for about a couple of months due to the lockdown imposed by the government. For now, the fans are waiting to see him back in action in the Serie A 2019-20 which starts from June 20, 2020.

(The above story first appeared on LatestLY on May 29, 2020 09:49 AM IST. For more news and updates on politics, world, sports, entertainment and lifestyle, log on to our website latestly.com).