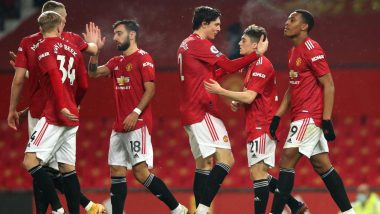 Stamford Bridge hosted the hame between Chelsea and Manchester United in the EPL 2021-22 match. What was expected to be a one-sided encounter for the home team, turned out to be a draw. The match ended with a 1-1 draw. It was Jadon Sancho who scored the first goal for Manchester United in the 50th minute and took the team to 1-0. Whereas at the 69th minute of the match, Jorginho scored from a penalty and took the team 1-1. Needless to say that the players took to social media and reacted to the result of the game. Chelsea vs Manchester United, EPL 2021-22 Ends With 1-1 Draw, Watch Goal Highlights.

The likes of Cristiano Ronaldo, David de Gea, Bruno Fernandes took to social media and hailed the efforts of the team. Jadon Sancho, who scored the second goal this week took to social media and posted a tweet hailing the effort of the team. However, the players were a bit disappointed with the fact that they could not get three points in their kitty. Now, check out the tweets below.

Rest and recover in another important game on Thursday. @ManUtd pic.twitter.com/Esn9qAJg0B

The team fought for everything, we must continue this to achieve our aims 🔴 pic.twitter.com/uRsWSXeUWs

(The above story first appeared on LatestLY on Nov 29, 2021 11:11 AM IST. For more news and updates on politics, world, sports, entertainment and lifestyle, log on to our website latestly.com).