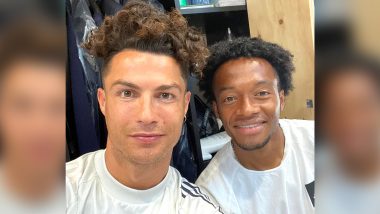 Cristiano Ronaldo has used his quarantine time in Madeira to great use by grooming his hair. The Juventus talisman, popular for his outrageous goalscoring feats, has been experimenting with his hairstyle of late. On Monday, Ronaldo took to Instagram to show off his new hairstyle to his fans on social media. Posing alongside Juventus teammate Juan Cuadrado, Ronaldo showed off his latest look, some sort of curly mop. Ronaldo has found his form once again and has scored in successive league matches after going four games without a goal. Cristiano Ronaldo More Likely to Win Ballon d’Or 2020, Lionel Messi’s Rankings Drop.

Ronaldo has always experimented with his hairstyles and has pulled off some of the most extravagant ones. But his latest hairstyle is far from the regular hairdos. In the picture, Ronaldo can be seen posing in his extremely long and curly hair after a Juventus training session. Cristiano Ronaldo vs Lionel Messi: Bhuvneshwar Kumar Makes a Pick Between the Two Football Stalwarts.

What do you think about my look like my brother Panita ?! 🤔🤪

“What do you think about my look like my brother Panita ?” the Portuguese captioned the post, suggesting that perhaps Cuadrado was the inspiration behind his latest hairstyle.

The 35-year-old superstar has been experimenting his hairdos in recent times and has posed in different hairstyles, which include a throwback to his early playing days. Meanwhile, he was in the headlines recently after rumours sparked that perhaps he had exchanged rings with girlfriend Georgina Rodriguez, who was seen flouting a diamond ring during the couple’s weekend trip to Portofino.

(The above story first appeared on LatestLY on Jun 30, 2020 10:18 AM IST. For more news and updates on politics, world, sports, entertainment and lifestyle, log on to our website latestly.com).