Cristiano Ronaldo has handed in his transfer request. Manchester United have no intention to sell the superstar in the summer but with the 37-year-old asking for his exit, the club could be forced to part ways with him. 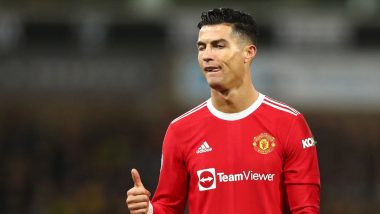 Cristiano Ronaldo's future could be away from Manchester United as the Portuguese star has handed in his transfer request. The 37-year-old footballer has asked the club to let him leave if an acceptable offer arrives. The Portugal international returned to the Premier League side last year after leaving Juventus. Cristiano Ronaldo Transfer News: Manchester United Have no Intention to Sell The Portuguese Ace This Summer.

Cristiano Ronaldo is a serial winner and though the 37-year-old had an impressive campaign last season, Manchester United were unable to achieve anything significant. The club failed to qualify for the Champions League and in addition, have not made any major signings this summer. This has resulted in the Portuguese star expressing his desire to leave.

Manchester United have no intention to sell the superstar in the summer but with the 37-year-old asking for his exit, the club could be forced to part ways with him. So with Ronaldo's future in question, we take a look at the five clubs, that can sign the Portuguese captain.

A return to his boyhood club has been a realistic option for the Portuguese star in recent years. Sporting CP director Hugo Viana recently expressed the desire to bring the 37-year-old back to the club but admitted that it will be difficult.

The Parisian club has always had the habit of signing superstar players and will definitely have the 37-year-old on their radar. However,  with the club reportedly taking a new direction in the summer, it will be difficult for them to bid on the Portuguese star. However, they are one of the few clubs that can afford Cristiano Ronaldo.

The Portuguese star has been linked with a move to Bayern Munich this summer as a replacement for Rober Lewandowski, who is set to leave. Despite denying it at first, the Bavarian will be looking to join the race to sign the 37-year-old, now that he has become available. However, Cristiano Ronaldo will need to take a significant pay cut to join the Bundesliga champions.

Yet another team linked with the Portuguese star is the Italian outfit AS Roma. With Jose Mourinho at the hot seat in Rome, the 37-year-old has been tipped for a reunion with his former manager. The Serie A giants haven't yet submitted an offer for the six-time Ballin d'Or winner but it could be an option for him.

With new owners taking charge, the Blues have emerged as one of the top contenders to land the superstar footballer. Todd Boehly is willing to splash the cash on the Portuguese but Manchester United will be reluctant to sell to a Premier League rival. However, if the offer is good enough, Red Devils could be forced to part ways with their star man.

(The above story first appeared on LatestLY on Jul 04, 2022 11:46 AM IST. For more news and updates on politics, world, sports, entertainment and lifestyle, log on to our website latestly.com).