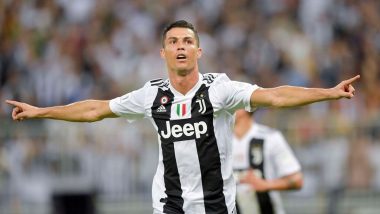 Cristiano Ronaldo set to return to Real Madrid? YES! You read it right! CR7’s manager Jorge Mendes has given out this huge update about the five-time Ballon d’Or winner. Jorge revealed that he is constantly in touch with Real Madrid. With this, there has been a possible return for Cristiano Ronaldo’s possible return at Bernabeu. We are sure that the fans who were disheartened seeing Ronaldo move away from Real Madrid are smiling ear to ear. As of now, Ronaldo is having quite a tough time at Juventus. The Portugal star might have had scored a plethora of goals for Juventus in Serie A, but the team has been knocked out from the Champions League 2020-21. Cristiano Ronaldo Transfer News Update: Juventus Star in Contact With Inter Miami Owner David Beckham Over Possible Move.

If reports are to be trusted, the former Manchester United striker is looking for a change from his current club and might not feature in the Bianconeri side as they are in a rebuilding phase. Even Juventus manager Andrea Pirlo had said that he will not urge Ronaldo to stay back if he wishes to leave the club in future. This is why there have been speculations one after the other about where would Ronaldo go after finishing his stint with Juventus.

🚨🚨🌖| Jorge Mendes has spoken with Real Madrid about the possibility for Cristiano Ronaldo's return. @jpedrerol #rmalive

Not very long ago, Real Madrid captain Sergio Ramos had admitted that letting go of Ronaldo was a big loss for CR7 and the club. Now it would be interesting to see how things pan out for the five-time Ballon d'Or winner in the coming future.

(The above story first appeared on LatestLY on Mar 12, 2021 03:56 PM IST. For more news and updates on politics, world, sports, entertainment and lifestyle, log on to our website latestly.com).