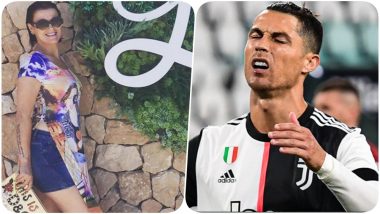 Juventus lost the finals of the Coppa Italia 2019-20 to Napoli on penalties by 4-2. Cristiano Ronaldo was criticised not only by the fans but also the manager of the team Maurizio Sarri who admitted that the five-time Ballon d’Or winner did not look sharper and is yet to touch the heights since his return. The fans slammed Portugal start for not rising up to the occasion.  Now his sister Elma Aveiro took to social media to slam the Juventus manager and said that the squad lacked brilliance. In the post, she mentioned that Ronaldo alone could not do miracles. Maurizio Sarri Takes a Dig At Cristiano Ronaldo After Juventus Loses Coppa Italia 2019-20 Finals to Napoli.

Elma shared the snaps where Ronaldo was obviously dejected after the loss. After the final whistle, the game went on to penalties and Paulo Dybala and Danilo Luiz da Silva were the ones who missed out on penalties after the match ended with a goalless draw. This is the second consecutive time that Juventus lost the Coppa Italia finals. Now, check out the post by CR7's sister.

After the match, Sarri admitted that this was quite a disappointment for the club, the fans and all the players too. While talking about Ronaldo, Sarri went on to say that he is in good shape like Dybala but lacks sharpness.

(The above story first appeared on LatestLY on Jun 18, 2020 07:12 PM IST. For more news and updates on politics, world, sports, entertainment and lifestyle, log on to our website latestly.com).