Croatia Squad for 2018 FIFA World Cup in Russia: Lineup, Team Details, Road to Qualification & Players to Watch Out for in Football WC

Road to FIFA World Cup 2018: Croatia surprisingly finished behind Iceland in Group I of the European World Cup Qualifiers with 20 points. 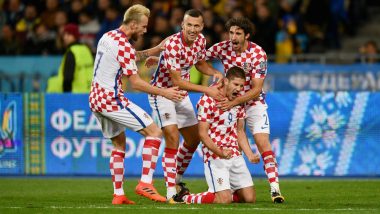 Croatia have a very decent looking squad going into the FIFA World Cup 2018, but shadows remain over which Croatian side will turn up on the day as they have underwhelmed at virtually all big tournaments since the 1998 World Cup in France where they reached the semis. Head coach Zlatko Dalic may have had a relatively less tenure at the helm of things, but his connection with most of the players is old going back to his stint with Croatian under-21 team. As Croatia have announced their preliminary 32-man world cup squad, we take a look at details about team line-up, their road to qualification in 2018 FIFA World Cup, performance in the last edition and players to watch out for. FIFA World Cup 2018 Schedule in IST for PDF Download: Fixtures, Groups, Time Table with Match Timings & Venue Details of Football WC in Russia.

The team looks solid with defensive mainstay Dejan Lovern having a fine season with Liverpool and veteran Vedran Corluka too back in full force. Domagoz Vida is another figure that makes the defensive line strong and Monaco goalkeeper Danijel Subasic can feel he has a solid wall in front of him to rely upon. Croatia has a host of midfielders to choose from the vastly experienced pairing of Ivan Rakitic of Barcelona and Luka Modric of Real Madrid, with 195 caps between them, the ones that make this side tick. The pair almost certainly playing their last World Cup will love to end on a high.

Ivan Perisic and Mario Mandjukic are two temperamental attackers who are known to wear their hearts on their sleeves. Hoffenheim striker Andrej Kramaric is another potent option with his two goals against Ukraine crucial in securing a playoff spot.

Croatia surprisingly finished behind Iceland in Group I of the European World Cup Qualifiers with 20 points. With six wins out of ten, they managed to set up a play-off encounter with Greece for a place in Russia. While the first leg of the play-off in Greece ended with a 0-0 stalemate, Croatia thumped Greece 4-1 in Zagreb to clinch a spot in the 2018 FIFA World Cup.

Croatia lost their opening match against Brazil 3-1 and then managed to turn their fortunes with a 4-1 win over minnows Cameroon in a game marred by ill temper. In their final group game against Mexico in which a win would have ensured progress to the knockouts, they lost 1-3 to bow out of the Cup.

Luka Modric: The Croatian skipper is arguably one of the most versatile midfield players and will be eager to convert his club form at the national setup. Modric will be tasked to control the tempo of his side and his long-range passing combined with brilliant defensive play makes him a real threat for oppositions.

Mario Mandzukic: Super Mario as he is known famously has played for some of the top clubs in Europe and his strong physical presence up top adds a new dimension to his teams play. He is good both in the air and with his feet and has a good awareness of the game. Expect some fireworks when he links up with winger Ivan Perisic in Russia 2018.

Croatia is placed with Nigeria, Iceland and 2014 World Cup finalist Argentina in Group D. They kick off their FIFA World Cup 2018 campaign against Nigeria on June 17, which will be followed by two more group-stage fixtures, against Argentina on June 21 and against Iceland on June 26. Before the action in Russia, Croatia will take on Brazil in a friendly match to be played on June 3 at Anfield Stadium. Croatia will also play a friendly game against Senegal on June 6 in Osijek.

(The above story first appeared on LatestLY on May 19, 2018 09:54 PM IST. For more news and updates on politics, world, sports, entertainment and lifestyle, log on to our website latestly.com).