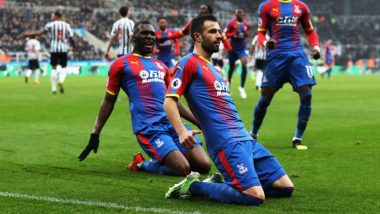 Crystal Palace vs Chelsea, Premier League 2019-20 Free Live Streaming Online: The race for top four is heating up in the English Premier League with the likes of Chelsea, Manchester United, Wolves and Leicester City all looking to get into Europe next season. Frank Lampard’s Chelsea play Crystal Palace in an away tie which is a potential banana skin for the Blues. Any slip ups and the Red Devils are ready to pounce on the opportunity provided to them. Chelsea got back to winning ways with victory over Watford in their last game after a shock defeat at the hands of West Ham United. Crystal Palace are 14th currently but can be a dangerous team to play in their own backyard.

James Tomkins, Jeffrey Schlupp and Martin Kelly are struggling with injuries at the moment and will not feature for Crystal Palace against Chelsea. Wilfred Zaha and Andrew Townsend on the wings carry a lot of threat with Jordan Ayew playing down the middle as the lone striker. Skipper Luka Milivojevic is ever dependable in the sweeper role and should have James McArthur and Cheikhou Kouyate to push up and join the attack.

Willian reaching the end of his Chelsea contract has been in fine form for the visitors and should start in a front three featuring him alongside Christian Pulisic and Tammy Abraham. Mason Mount and Jorginho provide mobility in the middle of the park while Ross Barkley could be handed a start too in order to catch Crystal Palace on the break. Antonio Rudiger has looked the pale shadow of his former self since the resumption of the league but the German defender will get the nod owing to his experience. CRY vs CHE Dream11 Prediction in Premier League 2019–20: Tips to Pick Best Team for Crystal Palace vs Chelsea Football Match.

Where to Get Live Telecast of Crystal Palace vs Chelsea, Premier League 2019-20 Football Match?

How to Get Free Live Streaming of Crystal Palace vs Chelsea, Premier League 2019-20 Football Match?

Disney+ Hotstar, the official partner of Star Sports will be streaming the game live on OTT platforms. Fans can tune in to Disney+ Hotstar app or website to get live streaming of Crystal Palace vs Chelsea in Premier League. Chelsea despite lacking in defence have a sharp attack that will help them win all three points from this game.

(The above story first appeared on LatestLY on Jul 07, 2020 03:25 PM IST. For more news and updates on politics, world, sports, entertainment and lifestyle, log on to our website latestly.com).