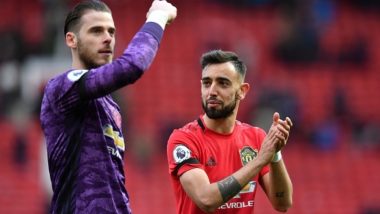 David de Gea has been in the eye of the storm for quite a long time now for his poor goal-keeping. But, last night proved to be a stunner for the Manchester United shot-stopper. The Reds were hosted by Brighton and De Gea’s flying save that went viral on social media and even bagged praises from his fellow teammate Bruno Fernandes. The Red Devils won the game, 3-0 and the maintained their fifth position on the EPL 2019-20 points table with 52 points in their kitty. In the first half, it was Mason Greenwood who scored a goal at the 16th minute of the match. Manchester United Forward Mason Greenwood Pays Tribute to Departing Teammate Angel Gomes With Goal Celebration (Watch Video).

The teams headed into the half-time with the visitors being one up. Now at the 69th minute, the hosts came close to the scoresheet when Leandro Trossard teed up Aaron Connolly, David de Gea's flying save didn't allow Brighton to get close to the net. Now, this effort by David de Gea was lauded by Bruno Fernandes and the video of the reaction and the save went viral on social media. Check them out below:

The reaction of the goal by Fernandes

Bruno Fernandes scored a couple of goals in the match and led the team to3-0 win. Talking about Manchester United, the Reds have so far played 32 games so far and they have won 14 games and lost eight matches. rest of the games ended with a draw. The team will next play against Bournemouth on July 5, 2020, at the Old Trafford.

(The above story first appeared on LatestLY on Jul 01, 2020 02:00 PM IST. For more news and updates on politics, world, sports, entertainment and lifestyle, log on to our website latestly.com).