Back in 2009, Lionel Messi was just a 22-year-old kid who was making big waves in football and had the potential to reach great heights. And now a decade later, he has established himself as arguably the greatest ever to play this beautiful game. 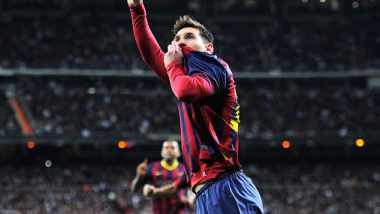 No other player in the world has defined this decade in football like Lionel Messi and as 2019 is coming to an end we take a look back at some of his magical moments over the last ten years. The Argentine has changed a lot in the years, he went from a fresh-faced wonder-kid to a bearded monster who has stamped his authority on the game as one of the best players of all time if not the best. The Barcelona captain capped off his 2019 with another Ballon d’Or trophy as he won it for a record sixth time. Year Ender 2019: Lionel Messi Starts and Ends Decade As 'The Best'.

Back in 2009, Lionel Messi was just a 22-year-old kid who was making big waves in football and had the potential to reach great heights. And now a decade later, he has established himself as arguably the greatest ever to play this beautiful game. The Barcelona forward is well known for his goal-scoring prowess and his playmaking abilities but the thing that sets him apart from others is the way he makes people feel when they watch him play. The one thing that comes to mind regarding Lionel Messi and there are quite a few, is his skill against Jerome Boateng when he left the German defender on his backside before scoring a sumptuous goal. ‘He made Boateng look like a fool’ said Andy West, author of Lionel Messi and the Art of Living. Year Ender 2019 Lionel Messi Special: From Ballon d'Or to FIFA Best Player Award, A look at Top Six Moments of Barcelona Captain This Year.

136 - Lionel Messi also posted the most assists in the last decade within the top five European leagues (136); 28 more than any other player in the 2010s. Ridiculous. #Opta2010s pic.twitter.com/MW1iTs6jzf

📊 — Lionel Messi in the last decade:

Boateng isn’t alone as Messi as made a fool of top-class players for his entire career. The Argentine once left Iker Casillas on his back in the 2011 Champions League first-leg semi-final and who could forget the nutmeg on James Milner in a 2015 UCL knockout tie. One of Messi’s best moments in this decade came against Barcelona’s arch-rivals Real Madrid in 2017 when the Argentine scored in the injury time to give his side a win and then celebrated by taking off his jersey and holding it in front of the Madrid supporters, showing them the name of the guy who has terrorized them for over a decade.

On this day in 2017, Lionel Messi scored his 500th @FCBarcelona goal to defeat Real Madrid and create that iconic celebration 🇪🇸 pic.twitter.com/Djd5l7uCEV

Lionel Messi has scored 579 goals in last decade with netting 50+ goals in nine out of the 10 calendar years. The little magician is now 32 and is in his twilight years but is showing no signs of slowing down as the Argentine has been at the top of the game for over a decade. He is still playing a level above the rest and will continue to do so until he retires from this beautiful game.

(The above story first appeared on LatestLY on Dec 31, 2019 02:02 PM IST. For more news and updates on politics, world, sports, entertainment and lifestyle, log on to our website latestly.com).