East Bengal vs ATK Mohun Bagan, ISL 2021-22: 5 Players to Watch Out for in Kolkata Derby

ATK already have a win this season which they managed against Kerala Blasters while East Bengal could only draw their opening match with Jamshedpur FC. Ahead of the Kolkata derby, we take a look at five key players who can make a difference in this game. 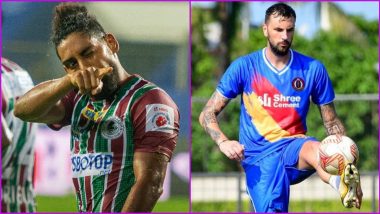 The biggest game in Indian football is fast approaching as we await the first Kolkata derby in the Indian Super League. ATK Mohun Bagan have dominated East Bengal in recent times but the beauty of derbies is that it fires up players which kind of levels things up. With plenty at stake for both these teams, history and significance of this battle will take a back seat as gaining those three crucial points assumes significance. ATK already have a win this season which they managed against Kerala Blasters while East Bengal could only draw their opening match with Jamshedpur FC. Ahead of the Kolkata derby, we take a look at five key players who can make a difference in this game. SC East Bengal vs ATK Mohun Bagan, ISL 2021–22: A Look at History and Some Facts About the Iconic Kolkata Derby.

Roy Krishna: Fijian international Roy Krishna has been an impressive signing for ATK Mohun Bagan as he has repaid the faith shown in him by goals. A constant threat in the attacking third, Krishna’s movements can catch East Bengal’s defence cold.

Hugo Boumous: Part of the title winning campaign last season with Mumbai City FC, Hugo Boumous scored a brace in his first game for new club ATK Mohun Bagan. His menacing runs from the wings and his ability to tee up his frontmen, makes him one of the best attackers in the league.

SC East Bengal vs ATK Mohun Bagan, ISL 2021–22: Ahead of Kolkata Derby, Take a Look at Last Five Meetings Between the Two Giants

Lenny Rodrigues: Indian midfielder Lenny Rodrigues likes to keep things calm and simple amidst all the attacking play of ATK Mohun Bagan. He will slot in the central position and keep things ticking for his club. His primary role is to shield the back four which he does effectively.

Amir Dervisevic: Former Slovenian international Amir Dervisevic did not start against Jamshedpur but looked good coming off the bench. He will pushing for an inclusion in the starting eleven against ATK Mohun Bagan as he can bring about creativity in East Bengal’s tepid midfield. SC East Bengal vs ATK Mohun Bagan Match Prediction in ISL 2021-22: Here's Who Could Win Season's First Kolkata Derby.

Franjo Prce: East Bengal defender Franjo Prce contributed in both areas of the pitch as his goal helped East Bengal take the lead against Jamshedpur. His ability to dominate in the air and cut out crosses will be of much help against ATK Mohun Bagan, a team comprising good wingers.

(The above story first appeared on LatestLY on Nov 25, 2021 03:00 PM IST. For more news and updates on politics, world, sports, entertainment and lifestyle, log on to our website latestly.com).