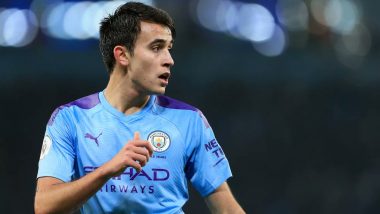 Eric Garcia has turned down a contract extension from Manchester City, amid interest from Barcelona. Garcia, who joined City from Barcelona’s academy in 2017, made his debut for the Premier League club this season and has emerged as a top defensive target for the Catalan giants with just one-year remaining in his current contract at the Etihad. Ahead of City’s Champions League last-16 second leg against Real Madrid at home. Manager Pep Guardiola confirmed that young centre-back has rejected City’s attempt to get him to sign a contract extension. Ferran Torres Transfer News: Manchester City Sign Valencia Striker For Five-Year Deal.

Garcia, 19, has just one-year remaining on his contract and could leave on a free transfer next season if City doesn’t sell him this summer. “He (Eric Garcia) announced to us that he doesn't want to extend his contract with Manchester City,” Guardiola told at the pre-match press conference. "He has one more year and after that, he doesn't want to extend. We want it but he doesn't want to, so I imagine he wants to play in another place." Lionel Messi Transfer News: Barcelona President Josep Maria Bartomeu Convinced Argentine Will Retire at Camp Nou Despite Inter Milan Interest.

Garcia’s decision to turn down a contract extension comes just a day after the club announced the signing of Dutch centre-back Nathan Ake from Bournemouth for 41 million pounds. City are rebuilding their defence this season and have been linked to a number of defenders in the summer transfer window. The Club are also expected to sign another defender before the October 5 deadline.

Reports also suggest Garcia is considering his future at City due to Guardiola’s uncertainty at the Etihad. Like Garcia, Guardiola is also in his final year of contract and has refused to commit towards signing an extension. Garcia made 13 appearances for City this season, eight of them in the last 12 games after the restart. His decision to reject an extension, however, could force City into a sale this summer to avoid losing him for free at the end of next season.

It could also compel Guardiola to sign a third centre-back from the market or hand a reprieve to John Stones and Nicolas Otamendi, who have been out-of-favour this term.

(The above story first appeared on LatestLY on Aug 06, 2020 10:11 PM IST. For more news and updates on politics, world, sports, entertainment and lifestyle, log on to our website latestly.com).